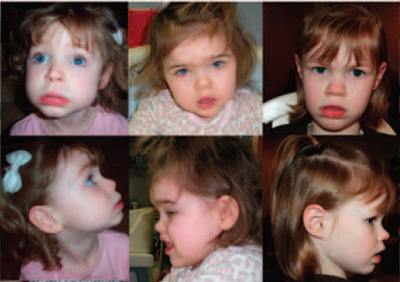 Subtle subgroup: Slightly atypical facial features, such as a broad forehead and deep-set eyes, distinguish some children with a disorder related to Rett syndrome.

Mutations in the CDKL5 gene lead to developmental delay starting at birth, seizures that begin before 3 months of age, and subtly atypical facial features, according to a study published 8 August in the European Journal of Human Genetics1.

CDKL5 and another gene, FOXG1, both lead to developmental disorders that resemble Rett syndrome. Clinicians generally consider mutations in CDKL5 to lead to ‘atypical Rett syndrome.’ However, the new study suggests that it is a distinct disorder with its own characteristic features.

Rett syndrome is primarily caused by mutations in MeCP2, which regulates the expression of other genes. MeCP2 and CDKL5 are both located on the X chromosome, so mutations in one copy are generally lethal in boys. CDKL5 mutations are rare in boys, but are more common than those in MeCP2.

Rett syndrome is characterized by seizures, motor abnormalities, abnormal hand movements, problems with language, features of autism and the tendency to lose skills throughout adulthood. The symptoms begin between 6 and 18 months of age.

In the new study, researchers looked at 77 females and 9 males with mutations in CDKL5 and compared them with 920 females who have mutations in MeCP2. These individuals ranged in age from 6 months to 22 years.

However, all 86 have some symptoms of a developmental disorder. All except one female had seizures early in life, and all but three females have severe deficits in motor ability.  Photos provided by parents for 60 girls and 7 boys with CDKL5 mutations indicate atypical facial features such as a broad forehead, high hairline and deep-set eyes.

In a second study, published 6 August in BMC Medical Genetics, researchers looked for CDKL5 mutations among 60 women with suspected Rett syndrome who do not have mutations in MeCP22. They identified two new mutations that are likely to be harmful, in two different individuals. Both mutations affect the protein’s active domain, and both arose spontaneously.

The researchers also identified one woman who has a genetic variant of CDKL5 that is absent from ten databases of common genomic variants and 100 controls. However, the woman’s mother has the same variant and no symptoms, suggesting that the mutation alone is not sufficient to cause the symptoms.