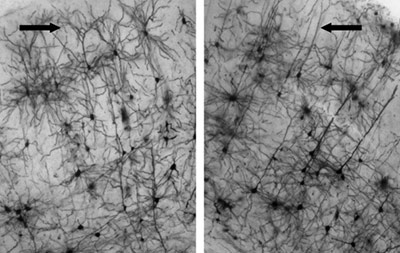 Bare branches: Neurons in a mouse with a mutation in the MeCP2 gene (right) have fewer branches than those in a control mouse (left).

MeCP2, the gene associated with Rett syndrome, has widely variable effects on mouse brains depending on the mutation it carries, according to unpublished results presented Tuesday at the 2013 Society for Neuroscience annual meeting in San Diego.

Rett syndrome is a severe disorder characterized by language deficits, repetitive behavior and some features of autism. Because MeCP2 controls the activity of thousands of other genes, therapeutic targets for Rett syndrome have been difficult to pinpoint.

Studies suggest that among other effects, mutations in MeCP2 can alter the levels of neurotransmitters, including dopamine, a chemical messenger that regulates motor function and reward.

In the new study, researchers compared the expression of 84 genes that code for subunits of receptors of various neurotransmitters. They looked at the expression of these genes in three mouse models, each with a different mutation in MeCP2.

For instance, they analyzed the expression of genes such as DRD2, a gene that codes for part of a dopamine receptor, and GABRA4, which codes part of the receptor for gamma-aminobutyric acid or GABA, a chemical that keeps brain signals in check. Neurons that release GABA have been implicated in both autism and Rett syndrome.

One of the mouse models the researchers used is a knockout — that is, it does not have a functional MeCP2 gene. The second model, called A140V, has a mutation in MeCP2 that disrupts binding to ATRX, a protein associated with X-linked mental retardation in boys. The third, called 308/y, has a mutation in the C-terminal end of the protein, which may disrupt its interaction with other proteins.

The knockout mouse and the A140V model have similar problems in brain structure, with small neurons and fewer dendrites — the signal-receiving branches of neurons — than controls have, says lead investigator Garilyn Jentarra, assistant professor of biochemistry at Midwestern University in Glendale, Arizona. The 308/y mice have less pronounced problems but have seizures and motor abnormalities.

The researchers then looked at gene expression in several brain regions, including the somatosensory cortex, the motor cortex and the cerebellum, of these mice at 6 or 7 weeks of age — past the point when they begin showing symptoms.

They found widespread dysregulation in the expression of neurotransmitter receptors in both the cortex and the cerebellum.

Interestingly, the majority of genes in the A140V cortex are mostly expressed at higher levels than they are in controls, but nearly all are dampened in the A140V cerebellum.

“There is very different behavior of MeCP2 between these two tissues,” Jentarra says.