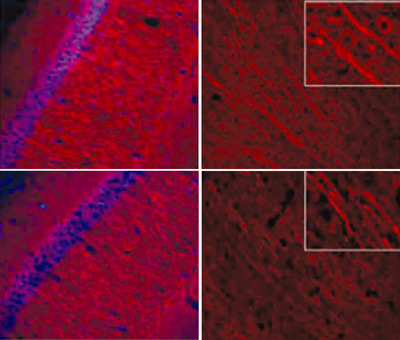 Branch loss: The brains of mice lacking the fragile X gene (bottom) in the hippocampus (left) and the cortex (right) have fewer signal-receiving branches than control brains do (top).

Removing the fragile X syndrome gene from two brain regions in mice leads to signaling defects but does not produce behavioral deficits, according to a study published in the February issue of Autism Research1.

In 2006, researchers deleted the autism-linked PTEN gene in neurons of the hippocampus and the cortex — brain regions involved in most higher-order cognitive processes2. They engineered the mice to lose PTEN only after neurons reach maturity.

In the new study, the same team used this technique to create mice that lose FMR1 expression in mature neurons of the hippocampus and the cortex.

These mice have shorter signal-receiving branches, or dendrites, and fewer proteins found at active neuronal junctions than controls do. Their dendrites are also less complex, with fewer branches, than those of controls.

In the mutant neurons, the mTOR pathway is hyperactive. mTOR is activated by mGluR receptors, which may be overactive in fragile X syndrome. Compounds that inactivate mGluR receptors are showing promise as treatments for the disorder.

The study implicates dysregulation of the mTOR pathway in fragile X syndrome. However, the mice do not show any of the behavioral deficits seen in the full mutants, suggesting that additional pathways are likely to underlie the disorder.