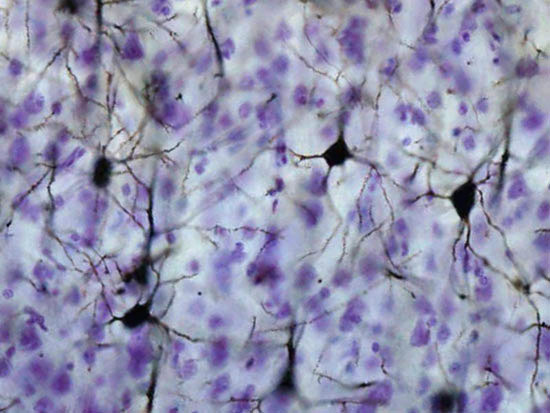 Linked layers: A new study bolsters the idea that autism arises from abnormal connections between neurons.

Mice missing the autism candidate gene MET have connections in the cortex that are twice as strong as those in controls.

The findings, published 13 April in the Journal of Neuroscience, agree with the ‘connectivity theory‘ of autism, which holds that individuals with the disorder have abnormally robust short-range neuronal connections and weak long-range connections.

MET has several important roles, including in the immune system, the gut and the brain. In the brain, MET is needed for the proper development of dendrites — thin neuronal branches — and the nubs that receive electrical messages on their ends.

In 2006, Pat Levitt‘s group reported that a common single-letter DNA blip in MET doubles the risk of autism. Three years later, they showed that the same variant is particularly common in children with both autism and gastrointestinal problems.

In the new study, Levitt and colleagues created mice that lack MET in the frontal cortex. Using a technique called laser-scanning photostimulation — in which ultraviolet light stimulates neurons to fire — the researchers mapped neuronal connections in brain slices from the animals.

Connections between cortical layers 2 and 3 — toward the outer edge of the cortex — and layer 5, a deeper layer, are twice as strong in mutant mice as in controls, the new study found. This adds to a study published by the same group last year, which found that the mutant mice have more trees of dendrites and larger dendritic spines in these areas.

By contrast, mouse models of Rett syndrome and fragile X syndrome have less connectivity between short-range circuits than controls, reflecting the infamous heterogeneity of the autism spectrum.