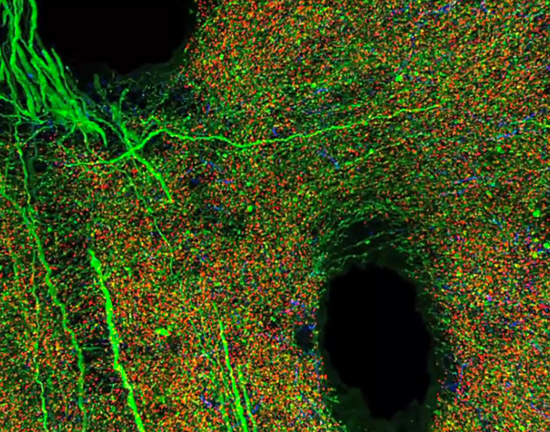 A new technique called array tomography allows researchers to visualize individual synapses, the complex junctions between neurons, in the mouse brain, according to a study published in the 18 November issue of Neuron. The researchers have also identified several markers that highlight the incredible diversity of synapse types.

Synapses are complex machines that regulate signaling between neurons and are often classified by their general type, such as whether they activate (glutamatergic) or inhibit (GABAergic) signaling in the brain.

But this is just the tip of the iceberg, says Steven Smith, professor of molecular and cellular physiology at Stanford University. “In a very real and significant sense, no two synapses are the same,” he says. “Your results are going to come up different every time you happen to stumble into a different kind of synapse.”

Developed in 2007, array tomography allows for high-speed visualization of multiple sections of a brain. The technique makes it possible to specifically label individual proteins and place them in the context of the overall brain structure.

To see the synapses, the researchers used antibodies to various synaptic proteins, followed by a fluorescent dye. One marker, synapsin I, labels nearly every synapse within the cortex, the researchers found.

They also identified 17 markers to individual proteins that allow them to reliably identify different types of synapses and the variation within these categories.

Smith and his colleagues are trying to correlate their findings in mouse brains with human tissue. Their ultimate goal is to use this technique to determine the best mouse model for a particular disorder.

Several studies over the past few years have suggested that autism could be the result of a lack of proper functioning at the synapse. Understanding the individuality of synapses, Smith says, “is going to be key to understanding every mental and neurological disorder that there is.”