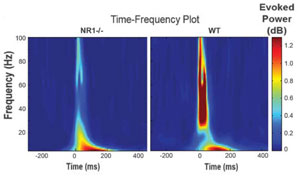 A compound called baclofen restores the balance between different types of brain signals and alleviates autism-like behaviors in mice, according to a study published 17 July in Translational Psychiatry1. A related drug called arbaclofen is in clinical trials as a treatment for autism and fragile X syndrome.

One popular theory holds that the brains of people with autism have too many excitatory signals and too few inhibitory ones. This imbalance can make a brain prone to seizures, and may explain the overlap between autism and epilepsy.

Excitatory signals are mediated by several different classes of proteins, including NMDA receptors. Mutations in genes that code for NMDA receptors have been linked to both schizophrenia and autism2. Glitches in a number of other autism candidate genes, including SHANK3, NLGN1, FMR1 and NRXN1, also lead to deficits in NMDA-mediated signaling.

In the new study, researchers engineered mice to have significantly fewer NMDA receptors than in controls. These mice have behavioral deficits reminiscent of autism: They socialize less than controls do, and perform poorly in a test of learning and memory.

The researchers also investigated gamma synchrony, an electrical measure of the coordinated activity of groups of neurons. This measure is known to spike during complex cognitive behaviors, suggesting that it represents the neural coordination required to accomplish these tasks.

The mutant mice have higher baseline gamma activity in the hippocampus, a brain region involved in learning and memory, than controls do. They also have lower gamma spikes after hearing a sound that typically induces gamma activity. Overall, these results lower the signal-to-noise ratio, and indicate weak coordination of brain activity during cognitive tasks, the researchers say.

The mutant mice with the highest baseline gamma activity are the least likely to engage in social interactions or to successfully navigate a maze, the study found.