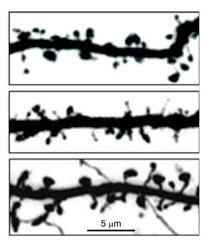 Growing branches: Neurons lacking an autism-linked protein have fewer signal-receiving projections (middle), which grow back when researchers add back the protein (bottom).

An autism-linked protein called CASPR2 promotes the development of dendrites, the bushy structures atop neurons that receive signals from other neurons, according to a study published 30 October in Proceedings of the National Academy of Sciences1. Lowering CASPR2 levels leads to sparse dendrites and few synapses, the junctions between neurons.

The findings suggest that CASPR2, encoded by the autism risk gene CNTNAP2, helps set up the lines of communication in the brain early in development. CASPR2 is known for its involvement in grouping potassium channels into clusters — which help neurons transmit electrical signals — along neuronal projections2.

Researchers have identified mutations in CNTNAP2 in individuals with autism and other disorders, including epilepsy and specific language impairment. Eliminating the protein in mice results in autism-like behaviors and seizures, along with signs of aberrant brain development.

Lowering levels of CASPR2 in cortical neurons isolated from newborn mice thins their dendrites, the new study found. These mice have fewer dendritic branches and smaller dendritic spines — bulbous protrusions along dendrites that receive input from synapses — than controls do. Collectively, the neurons also transmit weak electrical signals across synapses, which in this case reflects the drop in synapse number.

Adding back CASPR2 to the neurons returns the dendrites and signal strength to normal. CASPR2 spans the membrane of the synapse’s receiving end, where it could serve as a scaffold for a dendrite’s skeleton, the researchers say.

CASPR2 binds to CNTN2, which also sits on the receiving end of the synapse. However, decreasing levels of CNTN2 promote dendrite overgrowth — an effect opposite to that of low CASPR2 levels. This suggests that CASPR2 may also bind to another protein that regulates dendrite growth, the researchers say.