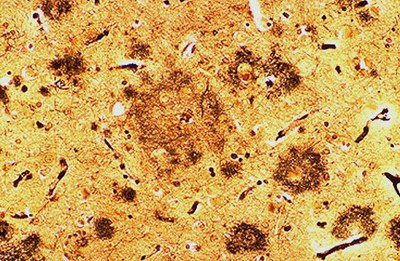 Lowering the levels of a protein associated with Alzheimer’s disease can rescue symptoms of fragile X syndrome in mice, according to a study published 26 October in PLoS One1.

Amyloid-beta protein precursor, or APP, can be cleaved into a small protein called amyloid-beta, the primary component of the plaques that accumulate in the brains of people with Alzheimer’s disease. There is also some evidence of a link between APP and both autism and fragile X syndrome.

For example, children with severe autism have higher levels of APP in their blood compared either with those who have mild symptoms2 or with controls3.

The new study also found elevated levels of APP in the brains of four individuals with fragile X syndrome, compared with controls.

Studies in flies have also suggested that presenilin, a gene associated with Alzheimer’s syndrome, and the fragile X syndrome gene FMR1 operate in the same pathway.

There is little evidence of Alzheimer’s-like symptoms in older individuals with fragile X syndrome, but the symptoms may be difficult to detect in a disorder characterized by intellectual disability, the researchers say.

In preliminary results presented at the 2010 Society for Neuroscience annual meeting in San Diego, researchers showed that lowering the levels of APP alleviates some symptoms of fragile X in a mouse model of the disorder.

In the new study, the same team engineered double-mutant mice lacking FMR1 and one or both copies of the APP gene. Mice lacking only FMR1 have elevated brain levels of APP, but these levels are lowered when one copy of the APP gene is deleted, the study found.

Mice lacking both FMR1 and one or both copies of APP have fewer seizures and less of a compulsion to bury marbles placed in their cage, compared with those lacking FMR1 alone.

Mice lacking FMR1 have immature dendritic spines, the signal-receiving branches of neurons, and their neurons take longer to recover after firing. Deleting one copy of APP also normalizes these features, the study found.

The researchers also looked at the levels of APP and amyloid-beta in the blood and postmortem brains from individuals with fragile X syndrome.