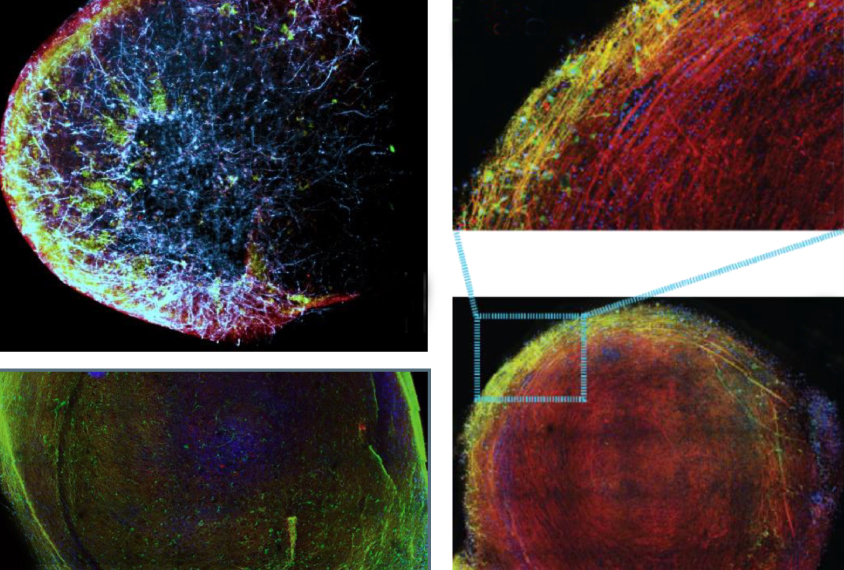 Excitable brains: Organoids derived from some autistic people have a dearth of cells that suppress brain activity.

For example, they have found an excess of brain activity in the organoids and have begun to probe the effects of mutations found in autistic people.

They detailed the unpublished results yesterday at the 2019 Society for Neuroscience annual meeting in Chicago, Illinois.

Researchers typically produce only a few organoids from a single person. Making hundreds instead enables researchers to more robustly evaluate differences among people.

“We’re wondering if variability itself is a biological readout,” Nestor says.

Nestor’s team reprogrammed skin cells from six people with autism and four controls to create stem cells. They put these cells, along with a cocktail of growth factors, into dishes with 96 small wells — producing 96 potential organoids in each dish.

After two weeks, they transferred the clumps of cells in the wells to pieces of high-tech mesh. This enables oxygen and nutrients to bathe the organoids so that more of them survive. It also causes the cells to spread out. Many brain organoids are spherical, but these take on a flattened shape.

The shape enables researchers to tag cells or record electrical activity without disrupting the organoid’s structure, “which is really convenient for us,” Madel Durens, a postdoctoral research fellow in Nestor’s lab, said while presenting the work.

Preliminary data suggest that these organoids have a shortage of a class of inhibitory cells called parvalbumin interneurons, the researchers say.

The findings also hint at a signaling imbalance in these organoids.

The researchers recorded electrical activity in the organoids, using arrays of tiny electrodes. They found that neurons in two of the three autism organoid populations they tested fire more often than those in three control populations, suggesting that the organoids from autistic people have weak brakes on their activity.

They then obtained data on mutations in the six autistic people. They used the gene-editing technology CRISPR to decrease the expression of one of the mutated genes, COL6A3, in control organoids. The resulting organoids also have too few inhibitory cells, linking the mutation to this effect.

The researchers plan to use this approach to probe the effects of other mutations found in people with autism.