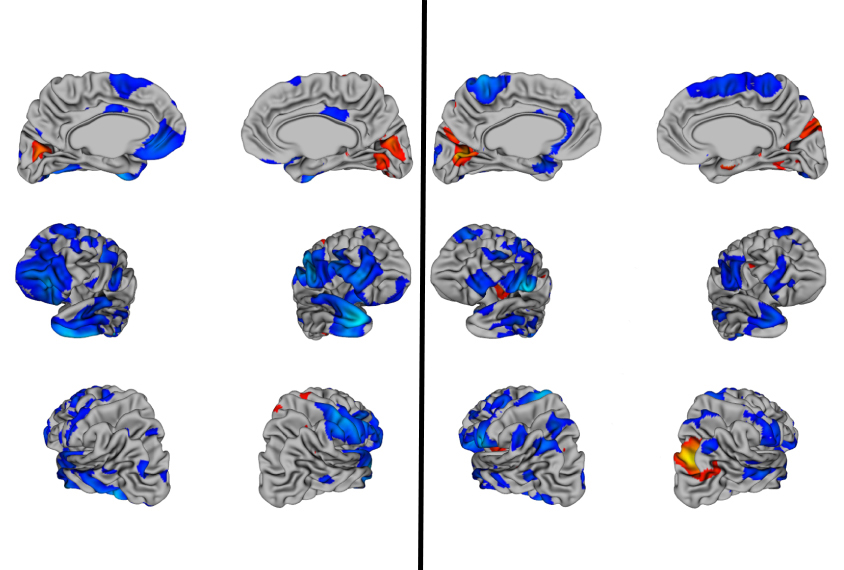 The brains of autistic children show few differences from those of children with attention deficit hyperactivity disorder (ADHD), or even of controls. The results come from two large studies with scans from nearly 450 children1,2.

However, one of the studies found that children with autism and those with ADHD show similar associations between brain structure and social difficulties.

The findings are consistent with mounting evidence of an overlap between autism and ADHD: The two conditions frequently co-occur and share genetic risk factors and behaviors.

Some experts say that biological differences between autism and ADHD may still exist, however.

“We know that these conditions have neural manifestations because the behavior is different, and so the brain is going to give rise to these differences,” says Dan Kennedy, associate professor of psychological and brain sciences at Indiana University Bloomington, who was not involved in either study. “Our challenge is to figure out which methods, which approaches are going to reveal these differences.”

In most brain-imaging studies, researchers compare autistic people with controls or with people who have other brain conditions, searching for patterns unique to autism. In the past few years, some experts have advocated looking for markers for any traits shared across diagnoses such as autism and ADHD. The new studies used both strategies.

Anagnostou and her colleagues scanned the brains of 159 children with autism, 77 with ADHD, 44 with obsessive-compulsive disorder (OCD) and 32 typical children, all aged 6 to 18 years. They assessed the children’s social skills using parent questionnaires and a test that requires inferring mental states from pictures of eyes.

They also analyzed the children’s brain scans for the thickness and volume of brain regions implicated in social behavior. These include regions of the cerebral cortex that are involved in empathy and social cognition, as well as structures that control emotion and social reward.

The researchers found no differences in brain structure between the groups when they compared the scans.

They then looked for differences in brain structure that track with social difficulties.

Across all groups, children who have better social skills, as measured by the eyes test, tend to have a bigger hippocampus (a memory hub) and amygdala (a brain area involved in processing emotion). In the autism group, social difficulties also coincide with thinning in parts of the cerebral cortex involved in thinking about others.

Still, the brain structure differences associated with social difficulties are similar in children with autism or ADHD, regardless of the measure used. Measures of thickness at 70,000 points across the brain also revealed similarities between these two groups. The findings appeared 4 February in Translational Psychiatry.

The results hint at a set of brain differences that could underlie the social difficulties shared among people with autism and those with ADHD, says Michal Assaf, director of the Autism and Functional Mapping Laboratory at the Olin Neuropsychiatry Research Center in Hartford, Connecticut, who was not involved in the study.

In the second study, Lucina Uddin and her colleagues collected brain scans from 43 children with autism, 43 with ADHD and 43 typical children, aged 8 to 13 years.

The researchers measured synchronous activity within and between five brain networks while participants lay resting in a scanner. Again, a straightforward comparison revealed no differences between the groups. And the brain activity of the 22 children who have both autism and ADHD looks the same as that of controls or children with only one of the two diagnoses.

“We were surprised and disappointed,” says Uddin, associate professor of psychology at the University of Miami. “We thought, ‘Surely if we get the categories right, we’ll start to see brain differences that differentiate the groups.’ But no matter what we did, we didn’t find group differences.” The work appeared in January in NeuroImage: Clinical.

Uddin and Anagnostou say that large differences within each diagnostic group may have made it difficult to spot differences between the groups.

The next step, they say, is to let machine-learning algorithms analyze the brain scans and identify subgroups of autistic children whose brain structure or function differs from that of controls.