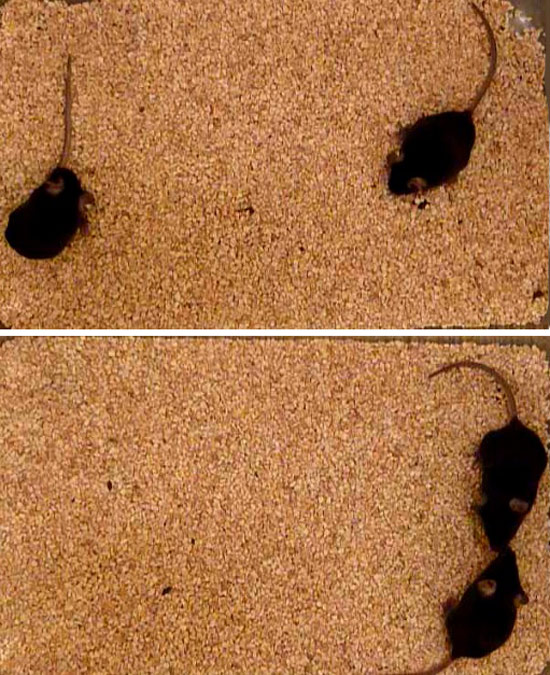 Social distortion: Rather than interacting with other mice as controls do (bottom), mice lacking the CNTNAP2 gene (top) keep to themselves.

Social distortion: Rather than interacting with other mice as controls do (bottom), mice lacking the CNTNAP2 gene (top) keep to themselves.

Mice lacking CNTNAP2, a gene linked to autism and language impairment, show behaviors and brain abnormalities that reflect those seen in people with the disorder, according to new findings presented Thursday at the International Meeting for Autism Research in San Diego.

The mice also respond much like people with autism when treated with risperidone, a drug that alleviates the hyperactivity and repetitive behaviors associated with the disorder.

This suggests that the mouse might be a good model for testing compounds that target the molecular pathways affected by CNTNAP2, researchers say.

The CNTNAP2 mouse has many behavioral features of potential relevance to autism, says Craig Powell, assistant professor of biology at the University of Texas Southwestern Medical Center in Dallas. Powell, who is not involved with the work, heard the presentation at the meeting. “It will help determine abnormal brain function at the level of molecules, synapses, neurons and circuits, and to predict potential therapeutic targets that can then be tested.”

Israeli researchers first created mice lacking CNTNAP2 in 2003 to study interactions between neurons and glia, which are brain cells that help guide neuronal branches to their targets. The researchers showed that CNTNAP2 helps promote the formation of myelin, the fatty covering that insulates neuronal projections and helps transmit signals.

Researchers in California began working with the mouse after studies linked CNTNAP2 to autism and language disorders. They cross-bred the Israeli mice with another mouse strain often used in research studies — Black 6 — and waited until the 12th generation to begin their experiments.

“Background is very important in behavioral studies,” says Olga Peñagarikano, a postdoctoral fellow in the laboratory of Daniel Geschwind, chair of human genetics at the University of California, Los Angeles. Peñagarikano presented the team’s work at the conference in San Diego.

The researchers carried out a slew of behavioral studies on the CNTNAP2-deficient mice, and found that they show many behaviors reflective of autism. For example, the mice spend less time interacting with cage-mates than controls do, and obsessively groom themselves, a marker of repetitive behavior.

The mice also show a striking insistence on sameness. Controls confronted with a T-maze alternate between left and right turns, but these mutants follow the same path each time.

In the Morris water maze test, in which mice are immersed in a pool with a hidden platform, the mutant mice learn the location of the platform and swim to it in repeated trials. But when the platform is moved to a different part of the pool, they keep returning to the old location rather than swimming to the new one.

Like people who carry mutations in CNTNAP2, the mice are also prone to seizures and are hyperactive.

When the researchers looked at brain tissue taken from the mutant mice, they found fewer interneurons, which dampen electrical signaling in the brain. They also found that neurons that should have migrated to the upper layers of the cortex in the animals remain stuck deep in the cortex.

The animals also show impaired synchrony of neurons that typically oscillate together. This could underlie the faulty connectivity in people who carry CNTNAP2 mutations, Peñagarikano said.

Treatment with risperidone lowers hyperactivity and repetitive behavior in the animals, but it does not improve their social behavior. These are precisely the same effects seen in people with autism taking the drug, though not all respond equally well to the treatment.

“We think that this mouse is probably a very good model for pharmacological testing,” Peñagarikano said. “It would also be a good model for understanding the different pathways that lead to autism-related behaviors.”