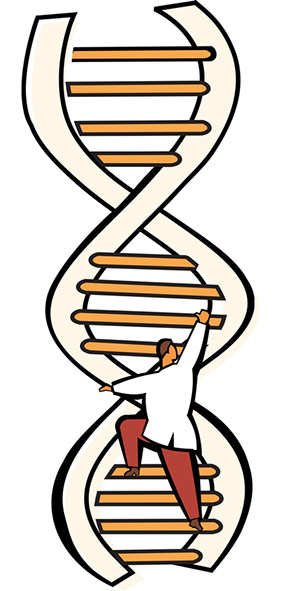 Seeking significance: A new statistical analysis can help determine whether a mutation in a person with autism is related to the disorder.

Spontaneous, or de novo, mutations are elevated in people with autism, but only in those who also have intellectual disability. The unpublished data were presented 9 September at the Broad Institute Symposium on the Emerging Genetics and Neurobiology of Severe Mental Illness in Cambridge, Massachusetts.

The results show that people with autism can be divided into genetic subgroups, each with a distinct mode of inheritance, says Mark Daly, co-director of the Program in Medical and Population Genetics at the Broad Institute. Daly presented the results along with Elise Robinson, instructor in medicine at Harvard Medical School.

Studies have shown that severe intellectual disability tends not to be inherited, whereas family members of a person with autism often share traits of the disorder.

The team also presented a new method to determine the likelihood that a de novo mutation found in an individual with autism is related to the disorder.

The researchers divided more than 700people with autism into three groups: those with an intelligence quotient (IQ) of 100 or higher, those with an IQ below 100 and those with such severe language or cognitive difficulties that they were unable to complete an IQ test.

The participants are members of two autism datasets, the Autism Sequencing Consortium and the Simons Simplex Collection. The latter is funded by the Simons Foundation, SFARI.org’s parent organization.

What’s more, the genes affected in the groups with intellectual disability tend to also be present in non-human primates, suggesting that disrupting them would be damaging.

Harmful de novo mutations are so rare that when researchers find them in individuals with a disorder, they usually link this mutation to the disease. But these mutations may be found in someone with autism just by chance, says Kaitlin Samocha, a graduate student in Daly’s laboratory.

“How many mutations do you need to see to feel safe saying that a gene is really associated with disease and it’s not just a chance event?” she says.

To answer this question, Samocha and her colleagues established a method to score the likelihood that a random de novo mutation would occur in any given gene, based on this gene’s specific sequence. To do this, they determined a score for each possible DNA nucleotide change for every possible nucleotide trio, for example, AAA to ACA, or to AGA.

This score is based on the rates of existing single nucleotide polymorphisms from regions that don’t code for genes throughout the human genome, taken from the 1000 Genomes Project. When this score is calculated for entire genes, it automatically takes into account gene length: The larger a gene is, the more likely it is to be mutated by chance alone.

Using this method, the researchers compared the coding portion of the genome for 1,078 individuals who have autism with that of 343 unaffected siblings.

Individuals with autism are more likely than their unaffected siblings to have a “pile-up” of harmful significant de novo mutations in individual genes: 48 genes have multiple hits in the autism group, compared with 5 in controls, Samocha says.

In particular, the researchers found five harmful de novo mutations in SCN2A and — using an even larger dataset — ten significant harmful mutations in CHD8. Both genes have been linked to autism in other sequencing studies, supporting the validity of the method.

For more reports from the 2013 Broad Institute Symposium on the Emerging Genetics and Neurobiology of Severe Mental Illness, please click here.