How traits relate to brain activity may differ between autistic boys, girls 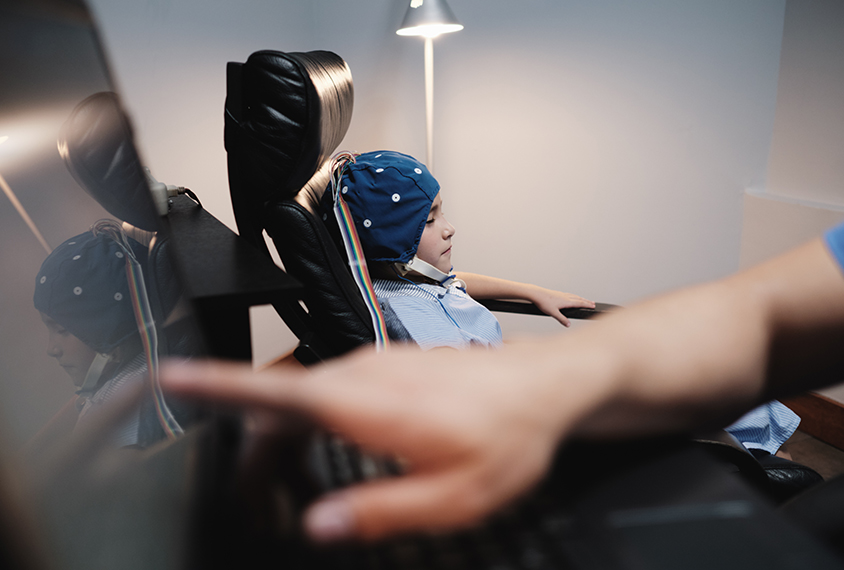 Biomarker bias: Brain-wave patterns in autistic boys, but not in autistic girls, appear to correlate with traits.

Autistic children show a distinct pattern of resting-state brain activity, and how that pattern relates to behavior differs between autistic boys and girls, according to a new study.

Previous analyses suggest that autism characteristics differ between boys and girls. But fewer girls are diagnosed with autism and included in research, in part because diagnostic assessments are tested on and biased toward boys.

In keeping with this bias, studies that have investigated resting-state brain activity as a possible biomarker for autism have been small and have failed to examine if this activity varies by biological sex, says Sunil Mehta, a psychiatrist who specializes in autism and other neurodevelopmental conditions at the Mayo Clinic in Rochester, Minnesota. Mehta was not involved with the work.

The new work bolsters the idea that the brains of autistic boys function differently from those of autistic girls. It should also serve as a warning to scientists to heed these differences when considering resting-state brain activity as a biomarker for autism, the researchers say.

“We cannot assume that what we learn about males with autism holds true for females with autism. That might sound obvious, but girls and women with [autism] are often underrepresented in research samples, and so researchers have not consistently looked at whether and how their findings apply to females,” says study investigator Emily Neuhaus, assistant professor of psychiatry and behavioral sciences at the University of Washington in Seattle.

Neuhaus and her colleagues at four sites in the United States used electroencephalography (EEG) to measure the resting-state brain activity of 81 boys and 61 girls with autism and 70 boys and 68 girls without the condition. All of the participants were 8 to 17 years old, with average or above-average cognitive skills.

The participants watched a short movie and then sat still with their eyes closed while the researchers recorded the ‘power’ of their brain waves — which reflects activity levels — at five frequencies and in nine brain regions. The team also assessed the children’s social, communication and daily living skills, using standard questionnaires filled out by the parents.

Compared with neurotypical children, those with autism displayed lower power in a frequency band called alpha. Alpha power, which is inversely related to neural activation and associated with attention and sensory control, may be promising as an autism biomarker, the researchers say. This power difference may mean that the autistic children experienced the assigned resting-state activity as an explicit task.

“Their data suggests that for people on the spectrum, when you ask them to do something that for most people is resting, it’s actually taking effort and attention for them to do that,” Mehta says. “It’s important for the field to recognize that the task in the context is very important.”

Among autistic boys only, lower power in the theta, beta and alpha frequency bands correlated with stronger social skills. These brain waves reflect cognitive functions such as memory and attention. Higher gamma power — which reflects sensory responses and working-memory tasks, among other functions — tracked with lower nonverbal intelligence quotients and more repetitive behaviors, the study shows.

In contrast, autistic girls’ brain-wave patterns did not correlate with their skills or behaviors. The results were published in September in the Journal of Neurodevelopmental Disorders.

Researchers aren’t sure why these differences exist.

“It could be that boys and girls are using different strategies to navigate the same social situations or using actual different circuits in the brain, which is reflected in the EEG,” Mehta says.

The findings suggest that researchers need to look “a lot more at differences between autistic males and females,” says Emily Jones, professor of translational neurodevelopment at Birbeck, University of London in the United Kingdom, who was not involved with the work.

The underrepresentation of autistic girls in research “may well be contributing to disparities in access to healthcare, to diagnosis, to support services,” she says.

Understanding how differences in sex and gender may affect the development and expression of autism “requires designing studies with that capability from the outset,” Neuhaus says.

“We need to look within the autism community to consider how some people may be represented by a particular study finding while others are not,” Neuhaus adds. “If we don’t, the risk is that we develop theoretical models of autism, diagnostic tools or intervention approaches that are not appropriate for the individuals who were not represented in that research.”