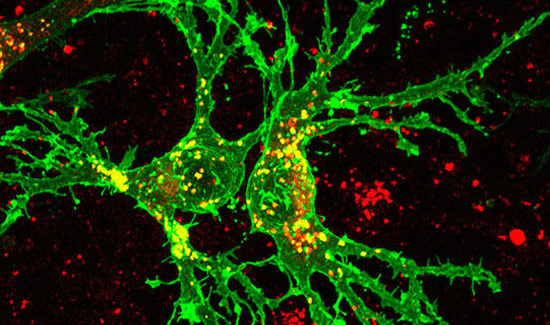 Off signals: A variation in a gene that regulates inhibitory neurons, which dampen signals in the brain, is associated with autism.

Researchers have identified a rare genetic variant linked to autism in DLX1, a gene that regulates the growth of neurons, they reported in December in the American Journal of Medical Genetics.

The researchers did not find any association between autism and variants in other DLX genes, or in the GAD1 gene, which regulates the production of gamma-aminobutyric acid, or GABA, a chemical messenger needed for brain development. The DLX genes and GAD1 both regulate inhibitory neurons, which dampen signals in the brain.

Researchers have also linked GABA, which regulates inhibitory neurons, to autism and related disorders, such as Rett syndrome.

DLX genes regulate the development of inhibitory neurons in the brain, whereas GAD1 controls the amount of GABA produced. Because of their functional link to autism, researchers consider these genes likely candidates for finding autism-associated mutations. Genetic studies have also associated the chromosomal regions where these genes are found — 2q31, 17q21 and 7q22 — with the disorder.

The researchers looked at these genes in 2,810 individuals from 715 families with at least two members who have autism. They found no association between any of the common genetic variations and the disorder. The rare DLX1 variant associated with autism strengthens the possibility that the gene plays a role in the disorder.