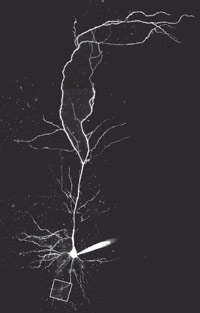 Information spike: Brain cells missing the fragile X protein do not filter information as well as healthy brain cells do.

Researchers have uncovered a novel role for the protein missing in fragile X syndrome — it regulates the release of neurotransmitters, chemical messengers in the brain, according to a mouse study published 20 February in Neuron1.

The fragile X mental retardation protein (FMRP) has been the subject of extensive research and plays a number of roles in the brain. But it is best known for regulating protein production in brain cells.

In people, loss of FMRP, which is caused by mutations in the FMR1 gene, causes mild to severe intellectual disability and other symptoms of fragile X syndrome.

Most research into FMRP’s role so far has focused on the signal-receiving end of the synapse, the junction between neurons. The new study shows that FMRP plays an integral role at the transmitting end as well.

In mice lacking FMRP, the electrical impulses that relay information, called action potentials, last longer than in controls, the researchers found. That in turn causes neurons to release more neurotransmitters to the neurons next to them.

“You can have a small change in action potential width of 10 to 20 percent, which can have a very large effect on neurotransmitter release,” says lead investigator Vitaly Klyachko, assistant professor of cell biology and physiology at Washington University School of Medicine in St. Louis, Missouri. The new study is the first to show that FMRP regulates neurotransmitter release by controlling the action potential, he says.

The studyintroduces a “new paradigm” for FMRP, says Jesse Hanson, senior research associate at the California-based pharmaceutical company Genentech, who was not involved with the study.

It’s not yet clear whether this particular function of the protein is linked to the symptoms of fragile X syndrome. But if it is, the findings could point toward new targets for therapy.

To try to find the reason for the prolonged action potentials, Klyachko’s team ran a dozen experiments exploring the molecular channels that control the flow of charged ions in and out of the cell during each electrical impulse.

The researchers found that blocking the so-called ‘big potassium channel’ has the strongest effect in terms of lengthening the action potential, mimicking the effect of a lack of FMRP.

This potassium channel lets potassium exit the neuron during an action potential. Calcium then enters the cell, which in turn triggers the release of neurotransmitters.

“There is no doubt in my mind that this is a real effect,” says Anis Contractor, associate professor of physiology at Northwestern University in Chicago, who was not involved with the study. “[FMRP] has such a key mechanism in how synapses work that it would have a big effect on how information is transferred in the brain.”

The study focused on subsets of neurons in the hippocampus and the cortex, areas of the brain involved in learning and memory. It’s unclear whether the altered signaling affects the brain more broadly.

Klyachko compares a neuron without FMRP to a radio station that gives off too much static. A typical neuron only transmits a fraction of the action potentials — about three out of ten, Klyachko says. But in a mouse lacking FMRP, about six of every ten messages are sent, flooding the next neuron with too many neurotransmitters.

“We think that might be bad because it basically overwhelms the system,” says Klyachko, making it difficult for neurons to pick out important signals from superfluous ones.

The researchers are trying to determine whether the longer action potentials contribute to the symptoms of mice lacking FMRP. They plan to search for ways to restore normal neuronal, circuit and cognitive function in the mutant mice.

Klyachko’s team is also working on developing a drug that targets the same part of the big potassium channel as FMRP does, called the beta-4 subunit. There are drugs that target other potassium channels, but none that focus solely on that subunit, Klyachko says.

Because FMRP has so many roles, researchers may be able to develop drugs for each pathway to help those with fragile X syndrome, says Lily Jan, professor of physiology at the University of California, San Francisco School of Medicine, who was not involved with the study.