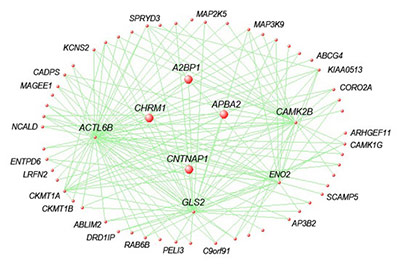 Network sharing: Expression of genes related to immune function in the brain is elevated in people with autism and in those with 15q11-13 duplications.

People with autism and those with duplications of the 15q11-13 chromosomal region share a distinctive pattern of gene expression in the brain, according to unpublished research presented Friday at the Dup15q Alliance Scientific Meeting in Sacramento, California.

Duplications of the 15q11-13 region are among the most common large genetic alterations associated with autism, present in about 1 to 3 percent of people with the disorder. Individuals with 15q duplications also commonly have seizures, sleep problems and poor muscle tone.

In the new study, researchers led by Daniel Geschwind at the University of California, Los Angeles analyzed postmortem brain tissue from 8 people with 15q11-13 duplications, 37 people with idiopathic autism — that is, not associated with a known genetic abnormality — and 30 controls.

The findings replicate a 2011 study of postmortem autism brains by Geschwind’s lab, using a different technique for measuring gene expression and a larger number of brains. Because of the bigger sample size, the new study was able to identify more genes with altered expression in autism brains.

Individuals with 15q duplications show the same patterns of gene expression as those with idiopathic autism, the researchers found. “All 2,158 of these genes were changed in the same direction,” says Grant Belgard, a postdoctoral researcher in Geschwind’s lab who presented the work at the meeting.

What’s more, the gene expression pattern is even more pronounced in 15q duplication than in idiopathic autism, Belgard adds. For this reason, individuals with the duplications may be a good subgroup to help researchers understand gene expression in autism more broadly, he says.

The genes that are dampened in both groups include many related to the structure and function of synapses, the junctions between neurons. For example, the list includes genes involved in the production of the signaling molecules parvalbumin and gamma-aminobutyric acid (GABA), as well as GABA receptors. “It’s like a who’s who of what’s interesting in neuroscience,” Belgard says.

Genes whose expression is elevated in both groups include many related to immune activation and microglia, immune cells in the brain that are increasingly being linked to autism and may be involved in pruning synapses. One dramatically elevated gene, S100A9, has been linked to activity of microglia in Alzheimer’s disease. It is also expressed at high levels in a mouse model of 15q duplication.

“There are some really exciting parallels, actually, with our data,” says Matthew Anderson, associate professor of pathology at Beth Israel Deaconess Medical Center in Boston, and developer of the mouse model.