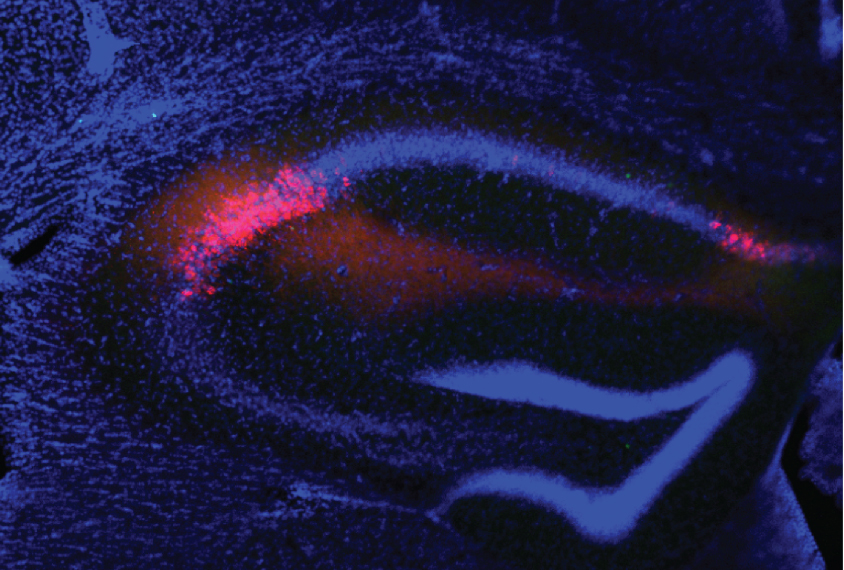 Ion flow: A protein (red) that ferries potassium out of nerve cells abounds in a small part of the brain’s memory hub linked to social behavior.

A drug that has been tested in clinical trials as a treatment for depression restores social memory in a mouse model of 22q11.2 deletion syndrome, according to a new study. The findings hint that the drug might also be useful to treat social cognitive difficulties in people with conditions such as autism, experts say.

People who are missing one copy of a chromosomal region known as 22q11.2 have heart abnormalities, distinctive facial features and an increased risk of schizophrenia and other psychiatric conditions. About 16 percent have autism. People with the syndrome also have a smaller-than-average hippocampus, a structure that functions as the brain’s memory hub.

The findings extend what researchers know about the role of the hippocampus in social behavior by suggesting that a small region of the hippocampus known as CA2 springs to life when an animal encounters an individual it hasn’t met before.

A strength of the study is that it describes the basic biology of a brain circuit, shows how that circuit is disrupted in a mouse model and identifies a therapeutic target to reverse those disruptions, says Anthony LaMantia, professor of developmental disorders and genetics at Virginia Polytechnic Institute and State University in Blacksburg, who was not involved in the work. “This is one of the best papers sort of going from soup to nuts that has come out.”

Previous studies showed that CA2 is crucial for social memory, the ability to recognize and remember others. “But we really didn’t have a good handle on what type of information CA2 was providing to the rest of the brain,” says study leader Steven Siegelbaum, professor of neuroscience and pharmacology at Columbia University.

Siegelbaum’s team recorded the electrical activity of CA2 neurons in six wildtype mice, as well as that of neurons in the neighboring CA1 region in three of the animals.

“In order to remember an individual, you first have to recognize whether you know them or you don’t, and we think that CA2 is initially providing this novelty signal,” Siegelbaum says.

The team fed information about the activity of CA1 and CA2 neurons into a machine-learning algorithm. Based on CA2 activity, the algorithm could decode when a mouse was interacting with another mouse, and whether that mouse was a stranger. Based on activity in CA1 — a region known for making ‘mental maps’— the algorithm could identify a mouse’s location in the cage.

The algorithm is a clever approach, says Enrico Cherubini, professor of neuroscience at the International School for Advanced Studies in Trieste, Italy, who was not involved in the work. Mice move during social interactions, so it can be difficult to distinguish place-related neural activity from that related to social behavior.

Because mice navigate by sight and recognize each other largely by smell, whereas people depend on sight for both functions, “it does raise the issue of whether or not you can really make the comparisons,” LaMantia says.

The hippocampus is known to be able to integrate multiple sources of sensory information, Siegelbaum says.

The researchers also recorded the activity of CA2 neurons in five 22q11.2 mice. These mice are known to have deficits in social memory, although they are just as interested in socializing as wildtype mice are. The model mice also show a loss of a certain type of neuron in CA2, as do postmortem brains of people with schizophrenia.

The CA2 neurons in the 22q11.2 mice are less active than those in controls, regardless of what the mice are doing, the researchers found. The cells don’t become as active when the mice interact with other mice, and they don’t show the marked increase in activity when there’s a new mouse around.

Instead, the cells’ activity tends to reflect where the mouse is in the cage — similar to the typical behavior of CA1 neurons. “The gain of function was surprising,” Siegelbaum says.

The researchers had evidence that the abnormally sluggish firing of CA2 neurons in the 22q11.2 mice could be due to overactivity of TREK-1, a protein that aids the flow of potassium ions out of the cell. (Too much potassium ion outflow inhibits a neuron from firing.)

So they injected the mice with spadin, a drug that blocks TREK-1 activity. The treatment normalized the activity of the CA2 neurons. It also enabled the mice to remember other mice that they had met before.

The researchers also used a genetic technique to turn down the activity of TREK-1 in the CA2 region. This method, too, corrects social memory problems in the 22q11.2 mice.

Siegelbaum plans similar studies to investigate CA2 function in other mouse models with genetic alterations linked to autism, such as those affecting SHANK3 and CNTNAP2.