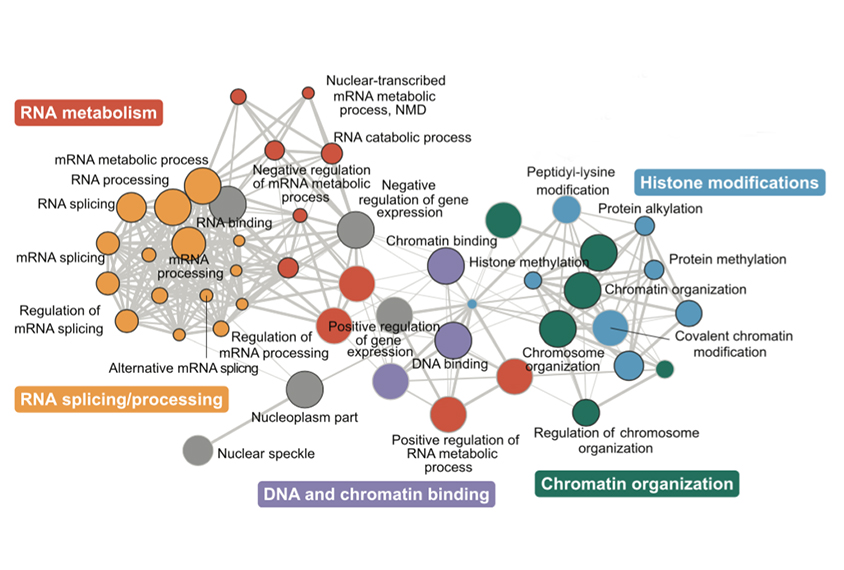 Wireless network: A group of more than 200 genes work together to control how multiple versions of proteins are created.

A variety of genetic risk factors for autism disrupt some of the same processes in cells, two new studies suggest1,2. Both studies used the DNA-editing tool CRISPR to mutate genes with ties to autism.

In one of the studies, researchers grew neurons from human stem cells lacking any of 10 genes implicated in autism. Half of these neurons show diminished electrical activity at their connections with other cells, or synapses.

“The neurons can serve as a rather efficient functional model for what may be happening in the brain of autistic individuals,” says co-lead investigator Stephen Scherer, director of the Centre for Applied Genomics at the Hospital for Sick Children in Toronto, Canada.

The findings are an important benchmark for future studies on the genes, experts say.

“Many of these genes weren’t studied in detail before, so this is starting to shed light on some of them,” says Mustafa Sahin, director of the Translational Neuroscience Center at Boston Children’s Hospital, who was not involved in the work.

In the second study, an independent team introduced mutations in virtually every gene in the genome, one at a time. Their goal was to identify the genes that control how microexons — small snippets of DNA — are spliced into genes.

This process, called ‘alternative splicing,’ can generate many versions of a protein from a single gene. Of the 233 genes that control the process, according to the study, about 7 percent have ties to autism. (Alternative splicing is thought to be disrupted in the brains of people with autism3.)

The findings “give us more insight into the proteins or genes we should be thinking about targeting to restore that pathway in autism,” says lead investigator Benjamin Blencowe, professor of molecular genetics at the University of Toronto.

Scherer’s team made induced pluripotent stem (iPS) cells by reprogramming skin cells taken from the father of a child with autism. They confirmed that these cells do not carry any mutations linked to the condition.

They then used CRISPR to insert mutations into 10 genes. The mutations cause the corresponding genes to produce nonfunctional proteins. Only three of the genes — CACNA1C, CHD8 and SCN2A — have strong ties to autism; the rest have weaker associations.

Neurons made from the stem cells express genes characteristic of a specific type — one that excites other neurons using the chemical messenger glutamate.

Mutations in five of the genes — ATRX, AFF2, KCNQ2, SCN2A and ASTN2 — result in neurons that have dampened electrical responses. And groups of these neurons display fewer electrical ‘bursts’ — spikes in activity caused by neurons firing in sync — than control neurons do.

The results are exciting because they show that “at least partially, there is some kind of convergence of evidence across rare autism mutations,” says Alysson Muotri, professor of pediatrics and of cellular and molecular medicine at the University of California, San Diego, who was not involved in the study.

Still, experts say, the researchers should explore the effects of mutations seen in autistic people.

“The study as designed allows the researchers to study the function of the gene, but not necessarily how it’s disrupted in individuals with autism,” says Jason Stein, assistant professor of genetics at the University of North Carolina at Chapel Hill, who was not involved in the study.

Others say the researchers should also explore the effect of the mutations in other cell types — for instance, progenitors of neurons, or interneurons, which dampen the activity of other neurons.

This would allow them to study how the mutations affect early development or the balance between excitatory and inhibitory neurons, says Luis de la Torre-Ubieta, assistant professor of psychiatry and biobehavioral sciences at the University of California, Los Angeles, who was not involved in the study.

In the second study, Blencowe and his colleagues focused on genes that control splicing of ‘microexons’ — small snippets of DNA that are 3 to 27 letters long. These tiny sequences are more likely to be present within genes expressed by neurons than by other cell types. A 2014 study revealed that microexon splicing is abnormal in autism brains.

The researchers equipped lab-grown cells from a neuroblastoma — a type of nerve-tissue cancer — with a synthetic sensor. The sensor contains the microexon sequence from either SHANK2 or MEF2D, genes linked to autism. It emits a fluorescent red glow if splicing is suppressed and a green glow if splicing is enhanced.

The team used CRISPR to impair 19,674 genes, one at a time. They found 233 genes that either enhance or stymie microexon splicing. Many of these genes were already known to play roles in splicing, whereas others were thought to primarily regulate the structure of chromatin, the coiled complex of DNA and proteins.

The researchers looked closer at one gene, SRRM4, that incorporates microexons into genes in neurons. Microexons regulated by SRRM4 are disrupted in about one in three people with autism, according to a 2014 study4. And mice missing the gene show behaviors reminiscent of the condition.

This gene regulates 118 microexons, Blencowe’s team found. It usually partners with two other proteins to do its job: SRSF11 and RNPS1.

“Now you have two more targets to try to correct the misspliced microexons [in autism],” says José Lucas, research professor at the Centro de Biología Molecular Severo Ochoa in Madrid, who was not involved in the study.

The team is trying to identify individual microexons that contribute to autism traits, beginning with mice.