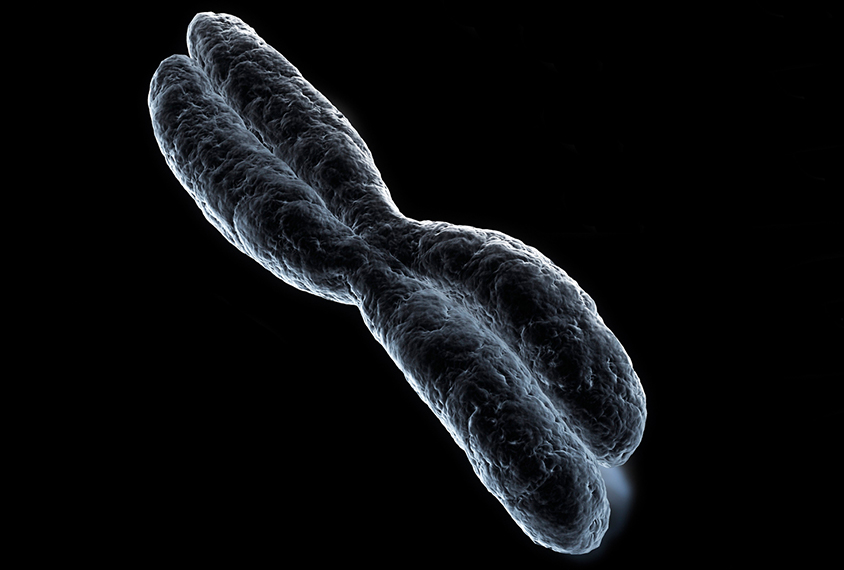 Hot spot: How the short arm of chromosome 16 is configured could explain why different types of genetic variants there converge on the same outcome.

Along 16p, the short arm of chromosome 16, a group of common variants and a rare deletion associated with autism seem to have overlapping effects on gene expression, a new study finds.

The study is the first to find convergence between two different types of autism-linked variants on the chromosome, says study investigator Daniel Weiner, a graduate student in Elise Robinson’s lab at Harvard University.

“There are many reasons to be interested in this, but one is to gain a better mechanistic understanding of what’s going on at the cellular circuit level in the brains of those with autism,” Weiner says.

Autism is highly genetic, with potential contributions from polygenic influences (common single-letter variants across the genome); rare deletions or duplications in DNA; and copy number variants (CNVs). But the relationships among these different variant types are not well understood.

“Thus far, there have not been many attempts to synthesize rare and common variant influences in developmental neuropsychiatric disorders like autism,” says Carrie Bearden, professor of psychology, psychiatry and biobehavioral sciences at the University of California, Los Angeles, who was not involved in the study.

Weiner and his colleagues developed a statistical method to find the regions of the genome that contribute most to autism likelihood. This method builds on previous work that focuses on smaller sections of the genome to uncover subtler effects from larger groups of genes.

The 16p region cropped up as home to the highest number of common variants associated with autism, Weiner and his colleagues found. This region also contains the 16p11.2 locus, a well-known hotspot for CNVs strongly linked to the condition.

“A lot of folks who looked at common variants didn’t really find much, and there hasn’t been much replication, but the group used a clever set of analyses and implicated 16p, which makes sense given the role of 16p11.2 in autism and schizophrenia,” says Elaine Lim, assistant professor of molecular, cellular and cancer biology at the University of Massachusetts Chan Medical School in Worcester, who was not involved in the study.

Deletion of 16p11.2 is associated with a decrease in the expression of 16p genes that are expressed in the brain, the team found when they used CRISPR to delete the region in neurons derived from induced pluripotent stem cells. These effects correlate at the level of individual genes within 16p, which further suggests that the rare CNVs and common polygenic variants in 16p might have similar functional consequences.

Using multiple sets of RNA-sequencing data from human donors, the team also found that people with more autism-associated polygenic influences in the 16p region show a decrease in expression of those same genes.

How these two types of genetic variation might contribute to the same outcome remains unclear. But the answer might lie in the 3D structure of the 16p region: It has a large amount of contact between genes and segments within the region, especially between 16p11.2 and a region with a high density of common polygenic variation, Weiner’s team found using previously published resources.

The team hopes to further explore how 3D architecture and contact within a region might influence gene expression, Weiner says.

The findings suggest that common and rare variants could act in a similar way in other chromosomal regions to influence the likelihood of autism and other neuropsychiatric conditions, says Bearden, who studies an autism-linked region called 22q11.2.

This work contributes a significant finding, Lim says, and suggests that dissecting the 16p region more carefully could open up new doors for autism research.

Weiner’s team has already begun exploring whether similar mechanisms might be at play in other neuropsychiatric diagnoses. They also plan to further investigate how multiple genetic variations could work together to contribute to autism.

The ultimate goal, Weiner says, is to better understand the biology behind different types of genetic variation and ultimately develop therapeutic approaches for those interested in it.