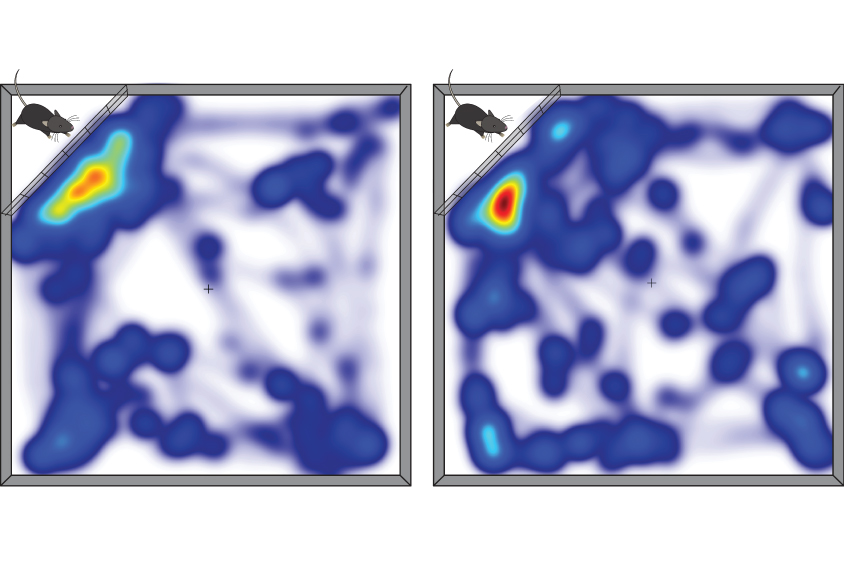 Turn-off: When neurons projecting from the thalamus to the prefrontal cortex are activated (right), mice spend less time interacting with another mouse in their space.

A set of neurons connecting the prefrontal cortex and the thalamus helps regulate social interactions in mice, according to unpublished research presented virtually today at the 2021 Society for Neuroscience Global Connectome. (Links to abstracts may work only for registered conference attendees.)

Studying this neural circuit in mouse models of autism may help researchers understand the biological factors underlying the challenges that many autistic people have with social interactions.

Brain activity in the prefrontal cortex plays an important role in social interactions, but recent work also suggests that “in order for the prefrontal cortex to do its job, it needs the thalamus to orchestrate that activity,” says Audrey Brumback, assistant professor of neurology and pediatrics at the University of Texas at Austin, who led the study.

She and her colleagues set out to see whether a specific loop of neurons running between a part of the prefrontal cortex called the medial prefrontal cortex (mPFC) and a region of the thalamus called the mediodorsal nucleus (MD) is involved in how mice explore other mice in their space. The researchers used a technique called optogenetics to selectively activate neurons extending from the mPFC to the MD, as well as those running in the other direction from the MD to the mPFC.

Activating either arm of this circuit causes mice to spend less time interacting with another mouse, the researchers found, suggesting that both are required for social behavior.

Neither stimulation affected other behaviors, such as the time the mice spent investigating an unfamiliar object or exploring the open space in the cage. The manipulations also didn’t change the animals’ responses to different scents, even ones from another mouse.

Brumback’s team reported preliminary findings at the 2019 Society for Neuroscience annual meeting in Chicago that blocking this circuit in mice exposed to valproic acid in utero — an autism mouse model — boosted social interaction. The team now plans to restart that work to test whether inhibiting or activating these projections can eliminate the social deficits seen in this model.

In a separate study, the researchers found that neurons projecting from two different parts of the MD to the mPFC have distinct electrical and anatomical properties, readying them to respond differently to similar stimuli.

They injected a tracer into the mPFC to label the two groups of neurons and then recorded their electrical activity. Neurons in the lateral MD quickly regain baseline levels of electrical activity after being activated and have a relatively permeable membrane, they found, which means they can respond quickly and specifically to stimuli.

Neurons in the medial MD, on the other hand, require less current to activate and recover more slowly, suggesting they are tuned to be sensitive to different inputs. Medial MD cells also have more dendrites — branched projections that connect with other cells — with more complex structures than do lateral MD cells. The two cell types “are really processing information in fundamentally different ways and are thus presenting very different data to the PFC,” Brumback says.

The team is now testing whether these two populations of neurons have different sensitivities in a mouse model of fragile X syndrome, an autism-related condition, and different effects on social behavior.