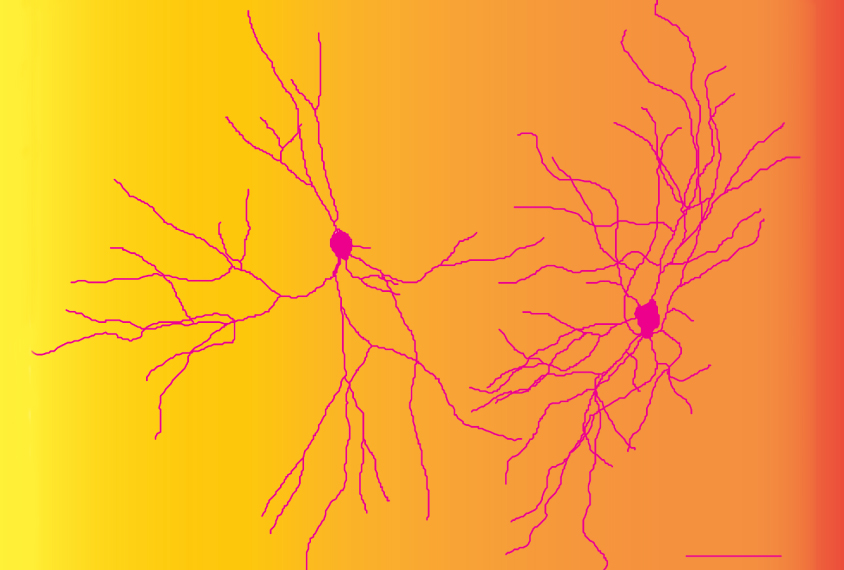 Bad connection: Neurons linking the thalamus to the prefrontal cortex do not signal properly in a mouse model of fragile X syndrome.

Neurons in a brain region called the thalamus may regulate social behavior and play a key role in autism, researchers reported at the 2019 Society for Neuroscience annual meeting in Chicago, Illinois.

The thalamus has long been thought of as a relay station that merely passes sensory information to the cerebral cortex. But researchers are recognizing that one part of it — the mediodorsal thalamus — is critical for cognition1.

The researchers identified two types of neurons that send signals from the thalamus to the prefrontal cortex, a region implicated in autism. They found that one of these types signals poorly in mice that lack FMR1, the gene mutated in fragile X syndrome.

“There’s been so much work done on the prefrontal cortex in autism, but we’re starting to understand that a lot of what the prefrontal cortex does is orchestrated by the thalamus,” says lead investigator Audrey Brumback, assistant professor of neurology and pediatrics at the University of Texas at Austin.

Brumback and her colleagues first used a tiny electrode to probe the electrical properties of thalamus neurons in slices from mice’s brains. They discovered two neuronal responses to the current the electrode transmits.

In all of the neurons, the voltage drops in response to the electrical current. But this drop persists in some of the neurons, whereas in others it ‘sags,’ or decreases over time. The team referred to these two neuron types as ‘low sag’ and ‘high sag.’ These responses have been found in other parts of the brain, but not the thalamus.

In mice that lack FMR1, the researchers found that high-sag neurons fire less often than those in controls, but low-sag neurons are unaffected.

“Neurons that have this [high-sag] electrophysiological property might be selectively impacted in autism,” Brumback says.

Brumback’s team also found that a circuit that links the thalamus and prefrontal cortex is important for social behavior. Her team has previously reported that this circuit is impaired in three mouse models of autism.

They used a tool called optogenetics — which involves the use of pulses of light — to turn on or off the neuronal branches that extend from the prefrontal cortex to the thalamus. Activating these branches in typical mice diminishes the animals’ interest in social interactions. Turning them off in mice exposed to valproic acid in utero — an autism mouse model — enhances social exploration.

“This circuit is bidirectionally important for social behavior,” Brumback says.