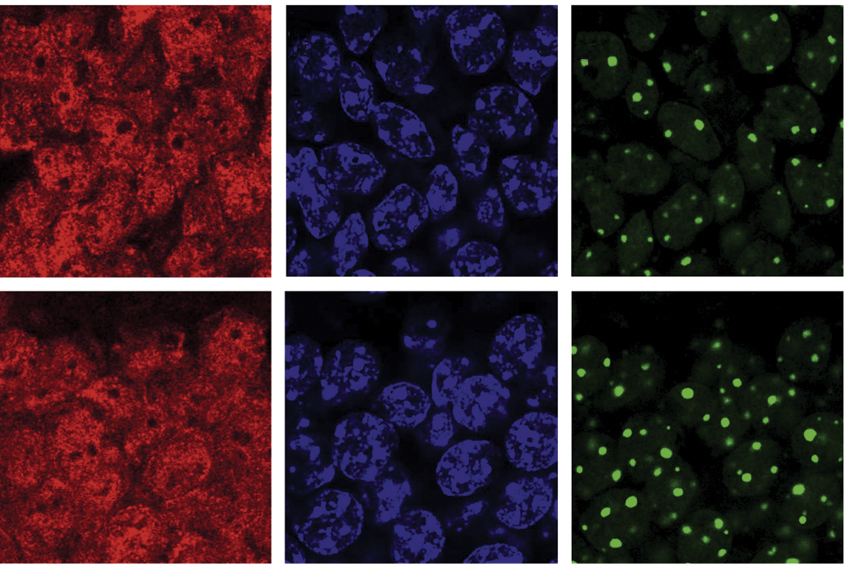 In a bind: The protein altered in Rett syndrome typically links up to chromatin at sites where there are specific molecular tags.

Altering a protein linked to Rett syndrome so that it cannot bind to a particular type of DNA tag results in traits reminiscent of the syndrome, according to a new study in mice. The findings could help explain the syndrome’s delayed onset in people: Because the tag does not arise until after birth, the inability to link to it becomes a problem only after 6 months of age.

Rett syndrome is a rare neurodevelopmental condition characterized by trouble with breathing and movement, as well as autism-like traits, such as repetitive behaviors and social difficulties.

The condition most often stems from mutations that lead to the loss of MECP2 protein, which typically acts as a bridge: On one side it binds to additional proteins and on the other, to chromatin, or coiled complexes of DNA, that have been tagged with a methyl group. This tagging, called methylation, helps to regulate gene expression.

One type of methyl tag that MECP2 is known to bind to, mCG, is found in cells throughout the body; another, mCAC, is particularly abundant in neurons. Levels of mCAC and MECP2 both increase in wildtype mice until around 5 weeks of age, which is when Rett model mice tend to begin exhibiting traits of the syndrome.

The timing “always seemed strange,” says study investigator Rebekah Tillotson, a postdoctoral researcher at the Hospital for Sick Children in Toronto, Canada. It was unclear whether a dearth of MECP2 in general or unbound mCAC specifically led to the appearance of traits at around that age in Rett model mice.

In the new study, the researchers used CRISPR to engineer mice that make a version of MECP2 protein that cannot link to the mCAC tag but can bind with mCG. These animals showed Rett-like traits, the team found.

“That suggests that a major driver of Rett syndrome is the loss of interpretation of this special neuronal methylation,” says Harrison Gabel, assistant professor of neuroscience at Washington University in St. Louis, Missouri, who was not involved in the study.

“If we want to figure out how to treat Rett syndrome, we’d better be trying to [understand how to] fix that dysfunction,” Gabel says.

By 6 weeks of age, for instance, the altered-MECP2 mice began to exhibit atypical movements. They performed poorly on tests of motor coordination and learning, and also showed unusually low levels of anxiety: Unlike wildtype mice, they did not tend to avoid open regions in a maze, where mice typically feel vulnerable.

But unlike most Rett model mice, which tend to be less active than wildtype mice, the altered-MECP2 mice were hyperactive. And they did not have the tremors Rett model mice usually have.

The altered-MECP2 mice died prematurely, at a median age of 29.5 weeks — earlier than typical mice but later than mice that have no MECP2, which tend to survive to about 8 weeks. The findings were published in January in Molecular Cell.

Because these mice mimicked Rett model mice in some ways but not in others, it may be that mCAC methylation, “although significant, does not account for the entirety of MECP2 function,” says Qiang Chang, professor of medical genetics and neurology at the University of Wisconsin-Madison, who was not involved in the work.

Additional experiments, in which researchers instead block the protein’s ability to bind mCG tags, would help distinguish the effects of the two types of DNA methylation, he says.

Even without that information, though, the changes to chromatin regulation point to novel therapeutic options, Tillotson says. One-third of the genes disrupted in the altered-MECP2 and Rett model mice overlapped, the study shows, and a subset had previously been linked to other neurological conditions, suggesting that these genes could be potential targets for treatment.

And because chromatin dysregulation plays a role in many neurodevelopmental conditions, including some forms of autism, investigating these candidate genes may provide insight into common mechanisms behind other rare conditions as well, she says.