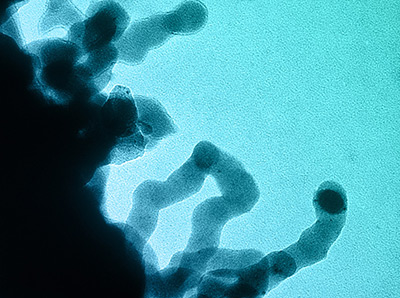 Biology Pics/Science Photo Library Space savers: Laid end to end, the chromosomes in your brain would stretch from the earth to the sun.

Several sequencing studies in the past few years have compared the genomes of individuals with autism with those of their unaffected parents and siblings1-3. And they have made a dramatic and unexpected discovery: Many of the mutations in individuals with autism are in genes that regulate chromatin, which helps package DNA in the cell nucleus.

This discovery has raised several questions: How might mutations that affect chromatin lead to autism?Why do these proteins, which are present in almost all cells, produce such behaviorally specific features? Do these chromatin regulators control the production of proteins that function at neuronal junctions, which are also frequently the target of mutations in autism?

The answers may lie in understanding the role of chromatin. Laid end to end, the 46 chromosomes in a single neuron would stretch for more than a yard. And if the chromosomes of every cell in your brain were tied end to end, the resulting thread would reach from the earth to the sun.

This vast quantity of DNA is tucked into the nuclei of billions of brain cells by being coiled around protein spools called nucleosomes — and the complex as a whole is chromatin. Nucleosomes gather into higher-order structures by associating with other proteins.

Every cell in the body contains the same basic set of chemical instructions — the DNA-encoded genome — but the unique identity of any given cell is specified by the readout, or expression, of only a subset of those genes. For example, a muscle cell and a neuron differ because of specific genes they express, not through any dramatic differences in genetic material.  This selective readout is accomplished by packaging the DNA, together with specialized proteins, in silent ‘heterochromatin’ and active ‘euchromatin,’ which are distinguished on a molecular level by specific types of chemical modifications.

Far from being a static packaging system, however, chromatin is a dynamic player in development and disease. Every DNA-templated process — for example, the duplication of the entire genome during cell division or the readout of specific genes vital to determining cellular identity — contends with chromatin.

Imagine having 46 spaghetti noodles, each stretching from San Francisco to San Diego, stuffed into a bag (the nucleus) and you are called upon to both keep them in order and have instant access to any spot on each of the 46 noodles.

Chromatin remodeling complexes help cells solve this organization-and-access problem. The complexes are assemblies of proteins that function in concert to regulate chromatin dynamics. They have become prominent in recent years as key factors in normal development as well as in diseases as diverse as cancer, schizophrenia and autism4, 5.

In our own laboratory, research has focused on the so-called BAF, or mSWI/SNF, chromatin remodeling complex. An intriguing feature of this multi-protein machine is that it exists in several different forms that are each specific to different cell types6, 7.  Mature neurons have a unique assembly of subunits that distinguishes the neuronal BAF complex from its counterpart in neural progenitors, the population of cells that give rise to both neurons and glia.

The BAF complex plays an evolutionarily ancient role in orchestrating nervous system development.  In organisms as distantly related as flies and mice, the complex has been implicated in the normal development of dendrites, the delicate cellular branches at which neurons receive information across their neuronal junctions7. Mutations that disrupt BAF function lead to symptoms that resemble those seen in autism.

For example, neurons from mice lacking a BAF component, BAF53B, do not grow in response to activity, as typical neurons do. Flies with mutations in the same subunit exhibit a retargeting of dendritic trees from one region of the brain to another, reflecting a role for BAF in building neural circuits8. Mice lacking the gene for the BAF53B subunit are hyperactive and show deficits in spatial memory and object recognition consistent with those seen in more severe cases of autism9.

What’s more, mutations in subunits of the BAF complex cause two other syndromes characterized by mental retardation and delayed language development — Coffin-Siris and Nicolaides-Baraitser. This suggests that a number of developmental disorders share the disruption of normal BAF complex-dependent chromatin remodeling activity as an underlying factor.

Another chromatin remodeling protein, CHD8, is also linked to autism. In fact, it may be the most frequently mutated gene in autism1, 10.

Although the function of this gene is poorly understood, it is known to inhibit the function of an important signaling protein called beta-catenin. Mice with permanently active beta-catenin grow extra-large brains, suggesting that the protein plays a role in brain growth13.

Interestingly, people with autism who have mutations in CHD8 also have macrocephaly, an enlargement of the brain. What’s more, mutations in beta-catenin have been found in some cases of autism1, 4, 10.

Like the BAF proteins, CHD8 is part of a multi-protein complex, but the specific set of CHD8-associated proteins is unknown14. It is possible that, as with the BAF complex, mutations in other subunits of the CHD8 complex contribute to developmental disorders and autism.

The surprising discovery that chromatin remodeling appears to be the most commonly genetically disrupted process in autism has raised many questions. Answering these questions will yield fundamental insights into intellectual development and disability and, hopefully, autism.

Gerald Crabtree is professor of pathology and developmental biology at Stanford University, in Palo Alto, California. Aryaman Shalizi is a postdoctoral associate in his laboratory.

Correction: This article has been modified from the original. The caption in an earlier version incorrectly stated that the chromosomes in a single cell — as opposed to all the cells in the brain — could stretch from the earth to the sun.