Brains of children with autism teem with surplus synapses 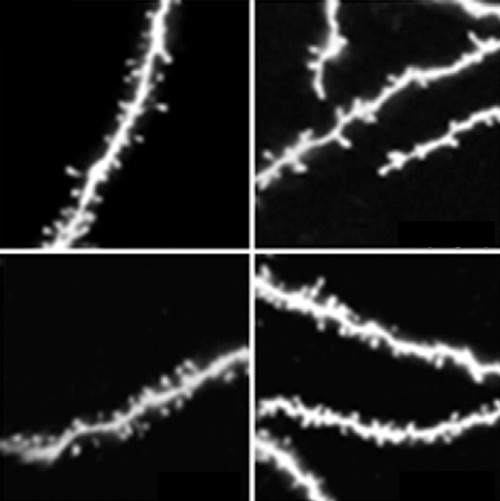 Clustered connections: In children with autism, synapses remain dense over time (bottom), rather than declining in number as they do in controls (top).

The brains of children with autism do not prune unneeded connections between neurons as they age, leaving them with too many of these neuronal links, according to a study published 21 August in Neuron1.

During the first few years of life, children’s brains form billions of synapses, but gradually eliminate unnecessary connections. In autism, this pruning process may go awry. Studies have found that people with autism have a higher density of dendritic spines, the small neuronal protrusions that receive messages from other neurons. These findings have led scientists to propose that autism may be caused in part by deficient synaptic pruning.

In the new study, the scientists studied brain tissue from people and mice, focusing on a protein called mTOR. When mTOR is activated, it spurs cells to produce more proteins and grow larger. Children with autism have unusually high levels of the activated protein, which seems to interfere with synaptic pruning.

“If you increase mTOR activity you’re going to have more synapses, and if you inhibit it you’re going to have fewer,” says lead investigator David Sulzer, professor of neurology, psychiatry and pharmacology at Columbia University. “Consistently, autistic kids have hyperactivated mTOR.”

Sulzer’s team chose to focus on mTOR because children with overactive mTOR are at increased risk of autism spectrum disorders2. Excess mTOR activity is also known to inhibit autophagy, a process in which damaged or unneeded cellular parts are dismantled and recycled3. And animal studies have suggested that autophagy may play a role in shaping synapses4.

Putting these pieces together, Sulzer hypothesized that a super-charged mTOR system might suppress the pruning of synapses, leading to their over-abundance in autism brains.

“This study, showing that there is an excess of spines early and that the spines persist during a time when they should be declining, is providing additional evidence for this idea,” says Christopher Cowan, associate professor of psychiatry at Harvard Medical School, who was not involved in the study.

Sulzer and his colleagues began by examining postmortem brain tissue from 20 children, half of whom had been diagnosed with an autism spectrum disorder. In line with other studies, they found that the brains of children and adolescents with autism have a higher density of dendritic spines than controls do.

To measure the amount of proteins associated with mTOR activity, the researchers then examined frozen brain samples from 16 children and adolescents with autism and 12 controls.

Among children between ages 2 and 9, the scientists found no difference in the amount of activated mTOR between the two groups. But in the autism group, levels of the protein remained high during adolescence, rather than decreasing over time as they did in the controls. Children and adolescents with autism also had lower levels of LC3-II, a marker for autophagy, and higher levels of PSD95, a protein found in dendritic spines, than controls did.

Taken together, the findings suggest that children with overactive mTOR undergo less autophagy and have more synapses than do other children.

For privacy reasons, Sulzer and his colleagues were not given many details about the children whose brains they studied, such as their symptoms or any mutations they may have carried.

“We don’t know the genetics of why they developed autism and yet, when we compare them to normal children they all show the same phenotype, which is a lack of synaptic pruning,” Sulzer says.

However, larger studies may reveal more variation, notes Cowan. “More brains need to be assessed to determine how consistent these effects will be,” he says.

Sulzer’s team also conducted a series of tests on mouse models of tuberous sclerosis complex (TSC), a disorder characterized by the formation of benign tumors throughout the body and brain. The TSC genes normally work to keep mTOR in check, so the mouse models have abnormally high mTOR activity, as well as autism-like social deficits. Children with TSC are at increased risk for autism5, 6.

Sulzer and his colleaguesfound that TSC model mice have a higher density of dendritic spines as adolescents than control mice do, and lower levels of LC3-II, the autophagy protein.

Treatment with rapamycin, a drug that inhibits mTOR activity, normalizes their spine density and LC3-II levels, signaling that synaptic pruning and autophagy have been restored. The drug also reverses the mice’s behavioral abnormalities, causing them to become as sociable as controls.

The researchers then created a mouse with two mutations: one in the TSC gene, causing mTOR overactivity, and a second in ATG7, a gene that controls autophagy.This second mutation disables autophagy in excitatory neurons — those that stimulate other brain cells to fire — in the cerebral cortex and in the hippocampus, a brain region involved in memory.

As expected, these double mutants show deficits in synaptic pruning. Rapamycin, however, does not restore the pruning to normal levels. The results imply that autophagy is crucial to the pruning process.

The parallel findings in humans and mice make the study “a tour de force,” says Kimberly Huber, professor of neuroscience at the University of Texas Southwestern Medical Center, who was not involved in the research. “To me that was pretty impressive.”

The results also suggest that restoring autophagy may be a promising approach for treating autism, she adds. “It might allow you to develop more targeted drugs.”