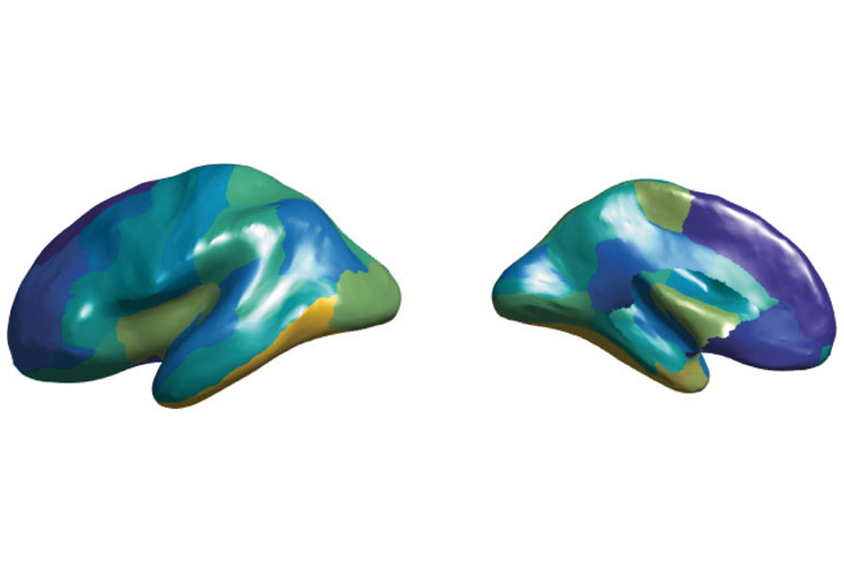 Mirror, mirror: The cortex of people with autism is of similar thickness (dark blue) in the left and right brain hemispheres.

The hemispheres in autistic people’s brains are more symmetrical than those of their typical peers, according to the largest imaging study to explore this relationship1. It is unclear what this difference means, however.

Typical people’s brains show a slight asymmetry between the left and right hemispheres, especially in regions associated with language. These differences are less pronounced in autistic people, the new study found.

The unusual symmetry seems to affect nine regions, mostly in the cerebral cortex. The results suggest that altered development of the brain’s left and right hemispheres contributes to autism.

“The average differences are very subtle,” says lead investigator Clyde Francks, head of the Imaging Genomics Research Group at the Max Planck Institute for Psycholinguistics in the Netherlands. “However, for the first time, we can be relatively confident that altered development of the brain’s left-right asymmetry is affected in [autism], and we can see which brain regions are most affected.”

The study’s size is its “big strength” says Christine Wu Nordahl, associate professor of psychiatry and behavioral sciences at the University of California, Davis MIND Institute, who was not involved in the work. Previous studies of this type had fewer than 1,000 participants — sometimes fewer than 100.

Those smaller studies and some in mice have suggested that brain symmetry is altered in people with autism or other psychiatric conditions. The new work supports this idea, but the differences it identifies are smaller than in those studies2.

“Other researchers may be surprised that some previously reported changes of brain asymmetry in [autism], based on much smaller samples, did not hold up well in our larger study,” Francks says.

Francks’ team analyzed magnetic resonance images of the brains of 1,774 autistic individuals and 1,809 neurotypical controls, aged 2 to 64 years. The images came from 54 datasets in the ENIGMA consortium, which collects genomic and brain-imaging data from more than 200 sites in 43 countries.

Autistic people’s brains are more symmetrical in certain regions than are those of controls, the researchers found. These include seven areas of the cortex that usually show left-right differences in thickness (especially in the frontal region) and two that typically show left-right differences in surface area. However, the volumes of the left and right putamina, structures involved in autism traits such as repetitive behavior and inhibited social reward, are less similar in people with autism than they are in controls.

The regions that differ from controls include several that are part of the default mode network, a set of connected brain regions that are known to be altered in autism.

The study was published in October in Nature Communications.

Although it is impressive, the study’s large sample size could also be obscuring important differences among individuals with autism, says Ralph-Axel Müller, director of the Brain Development Imaging Lab at San Diego State University in California.

Large samples like this one may include people who have different forms of autism and whose brains vary from those of neurotypical people in different ways, he says. Lumping these subgroups together in an analysis could flatten out their unique differences.

“In the most simplistic scenario, they actually cancel each other out so that you end up with very little difference from a typically-developing comparison cohort,” he says.

Comparing data from 54 different sites could be problematic, too, Müller says: Each site’s equipment can create distinct types of statistical noise. The researchers used the same method to process the data at each site to minimize this variability.

Nordahl also notes that the variability is less of a concern for a study comparing relative sizes of brain regions rather than absolute sizes. “I do have a little more faith in this type of analysis than I would just comparing volumes across 54 different sites,” she says.

Nordahl and Müller both suggest that clustering autistic individuals according to their brain structure would better highlight true structural differences among those with varying autism severity. Exploring which brain regions are associated with different forms of autism could be more illuminating than simply comparing autistic people with controls.

Francks says certain subgroups of autistic people might have larger differences in brain asymmetry than this study was able to capture, but says the study is just a starting point for future work.

Nordahl also notes that the average intelligence quotient of the autistic participants in the study is 104, and only 66 have an IQ below 70 — the cutoff for intellectual disability. To properly investigate such clusters, researchers should include people from across the full autism spectrum, not just those with high IQs, she says.

Francks’ team plans to analyze large sets of imaging data alongside genetic data to explore which genes affect both brain symmetry and autism.