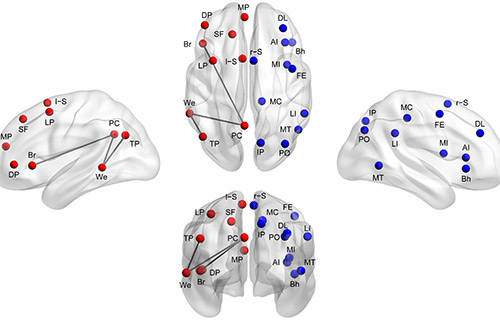 Neural connections: Regions related to language are on the left side (red) in the brains of typical individuals, and others involved in attention to external stimuli are on the right (blue).

People with autism show diminished language activity in the left halves of their brains but otherwise show typical specialization between hemispheres, according to a study published 6 February in Molecular Autism1.

Studies have shown that in people with autism, language processing tends to be more spread out between hemispheres or is concentrated on the right side rather than clustered in the left half of the brain, as it is in controls. It was unclear whether people with autism show this sort of atypical distribution, or lateralization, for functions other than language.

The new study relies on functional magnetic resonance imaging (fMRI) scansfrom 447 people with autism and 517 controls collected in the Autism Brain Imaging Data Exchange database.The scans measured patterns of blood flow in the brain while participants were at rest.

The data show the expected atypical distribution of the language networks in the brains of people with autism but normal distribution in networks unrelated to language. This specificity suggests that the difference in autism brains may emerge well after birth while language ability develops, rather than earlier in development when the brain’s halves begin to differentiate.

The networks altered in people with autism link language-related brain regions to regions involved in introspection, internal narrative and theory of mind — the ability to comprehend others’ mental states.The researchers say these differences may explain some of the difficulties in communication and social interaction associated with autism.

However, the results contradict those from a study published in September. That study reported that networks beyond those involved in language — including visual, auditory, executive and motor networks — also show different lateralization in autism than in controls2. But with 20 children and adolescents with autism and 20 controls, that study was relatively small. It also looked at a series of relatively broad networks, rather than evaluating connections between specific brain regions as the new study did.

The researchers say they hope that measurements of lateralization may someday be used to help diagnose autism or to predict long-term outcomes for children with autism.