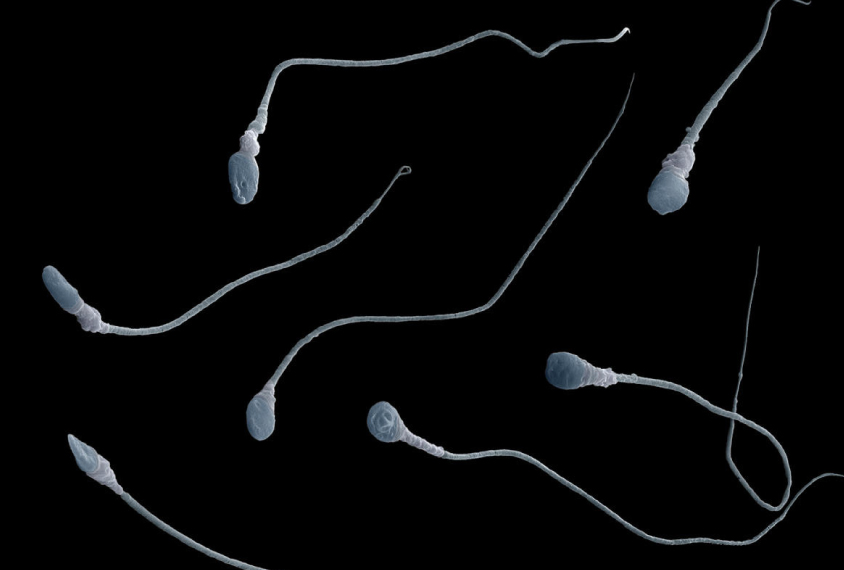 Like father: A ‘spontaneous’ mutation seen in a child with autism may in fact be detectable in her father’s sperm.

The findings discussed in the article below were published in the December 2018 issue of Nature Genetics1. The article originally appeared on Spectrum 19 October 2018, based on data presented at the 2018 American Society of Human Genetics conference in San Diego, California.

Some mutations that contribute to autism and arise spontaneously may be mistaken for inherited mutations.

Many studies may have overlooked this class of ‘mosaic’ mutations. Researchers presented the unpublished work yesterday at the 2018 American Society of Human Genetics conference in San Diego, California.

A mutation’s presence in sperm or egg cells enables it to be passed along to children. Still, these mutations are defined as de novo, not inherited, because they were not present in previous generations.

“We want to know if [a mutation] is mosaic in the parents,” says Hákon Jónsson, a researcher at deCODE genetics, a company in Reykjavik, Iceland, who presented the findings yesterday. “If you ignore this method, you omit half of the de novo mutations that are shared among siblings.”

The findings should spell a note of caution to researchers in the field, says Jonathan Sebat, chief of the Beyster Center for Molecular Genomics of Neuropsychiatric Diseases at the University of California, San Diego, who was not involved in the study.

“Most of the geneticists in the field are singularly focused on [the classical de novo mutations], so they are going to miss those things,” Sebat says. “If there is an inherited loss of function that is in fact mosaic in the parent, they are throwing that away — and those have recurrence risk.”

Jónsson and his colleagues looked at genes in 1,007 pairs of siblings from 251 families.

They first identified the paternal and maternal chromosomes in each child. They looked for two siblings who share a chromosome from one parent and carry the same mutation in that chromosome. They also looked for cases in which two siblings share a mutation and a third does not. They then looked at the parent’s blood to check for the mutation.

The presence of a mutation in the parent’s blood might lead others to mistakenly conclude that he inherited it from a previous generation. The researchers estimate that 4 percent of mutations thought to be inherited may in fact be de novo mosaic mutations.

Accurately classifying these mutations as de novo might have bolstered the case for certain genes being contributors to autism or provided valuable information for a family, say Anne Goriely, associate professor of human genetics at the University of Oxford in the United Kingdom, who was not involved in the study.

Getting these results required access to large families, however: 13 of the 251 families have eight or more children.

“Most people have very small families and there’s no pedigrees,” Goriely says. “Most [studies] don’t have the power to do this.”

The researchers also analyzed the risk of a de novo mosaic mutation being passed down to more than one child.

They looked at de novo mutations shared by siblings in two families, one with 17 children and the other with 10. Siblings are more likely to share a de novo mutation if it is present in a large proportion of the parent’s blood cells, the researchers found.

Based on these findings, the team developed a calculator to determine the recurrence risk of a given mutation. They used this tool to calculate the risk of recurrence in a family with two children who carry a de novo mutation that leads to epilepsy. The risk of another child in this family carrying this mutation is 83 times higher than for a classic de novo mutation, they found.

In another poster at the meeting, researchers showed the counterpoint: Mutations that appear to be spontaneous in a child may in fact be mosaic in the parent. The researchers were able to detect a de novo mutation linked to autism in a father’s sperm in 4 of the 20 families they studied.

In one family in that study, three children have a mutation in the autism risk gene GRIN2B, even though only one of the siblings has a diagnosis of autism, says Martin Breuss, a postdoctoral fellow in Joseph Gleeson’s lab at the University of California, San Diego, who presented the findings. Once the researchers discovered the mutation, they looked more closely and found that all the siblings have traits of autism.