Autism may share inherited variants with other psychiatric conditions 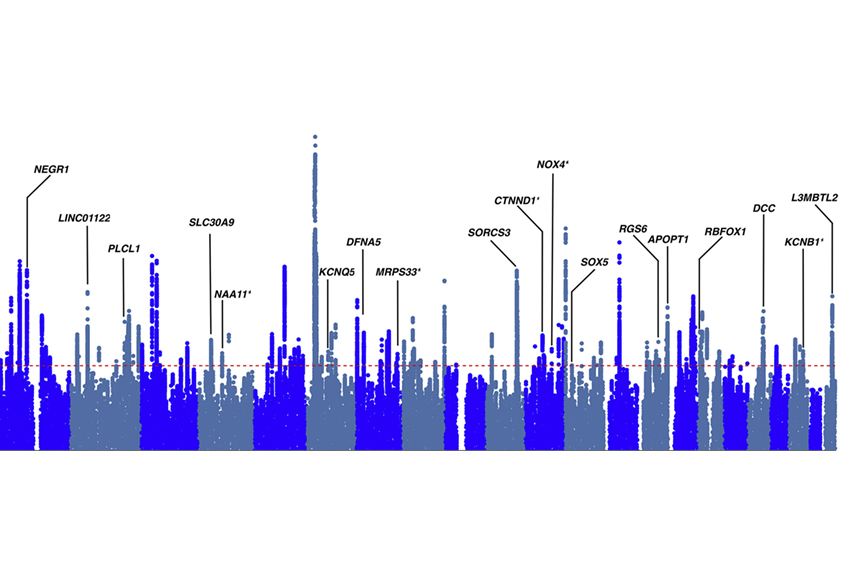 Some of the inherited variants implicated in autism also increase the odds of other conditions, including schizophrenia, bipolar disorder, depression and attention deficit hyperactivity disorder (ADHD), according to a new study1.

The results come from an international effort called the Psychiatric Genomics Consortium, which involves more than 800 scientists.

“These disorders, which we think of as very clinically different, might be related at the level of their genetic basis,” says lead investigator Jordan Smoller, associate chief for research in psychiatry at Massachusetts General Hospital in Boston.

Smoller and his colleagues analyzed data from 727,126 people, about one-third of whom have one or more of eight psychiatric conditions. The team focused on so-called common variants — single-letter changes to DNA that appear in 1 percent or more of the population.

The team linked 146 variants to least one condition, and most of them to multiple conditions. Variants in the latter group tend to affect genes that are highly expressed throughout life, starting during the second trimester of fetal development, and may be key to brain development.

“More and more, the picture that’s emerging is that there are multiple [variants] associated with, let’s say, a psychiatric vulnerability that is not specific to one disorder,” says Tinca Polderman, assistant professor of complex trait genetics at Vrije Universiteit Amsterdam in the Netherlands, who was not involved in the work. “Whether it develops into autism or [something else] may have to do with other factors.”

Smoller and his colleagues analyzed genetic data for 232,964 people of European ancestry who are diagnosed with one or more of the eight conditions, including 18,381 people diagnosed with autism. Their findings build on a 2013 analysis of data from people with any of five conditions. That study found strong ties between schizophrenia and bipolar disorder.

In the new work, the researchers scanned nearly 6.8 million sites in the genome, searching for variants that occur more frequently among people with a particular condition than they do in controls. They looked at the conditions in pairs, searching for similarities in their genetic influences.

Autism shows the strongest overlap with depression. It also shows ties to ADHD and schizophrenia, and weaker links to bipolar disorder.

“Overall, the commonalities that they see are what you would expect, except for the very strong association between major depression and autism,” says Lucia Peixoto, assistant professor of biomedical sciences at Washington State University Spokane, who was not involved in the study. Autistic people are often diagnosed with depression in adulthood, she says, but there’s debate in the field as to why.

A statistical analysis of the overlap across all eight conditions suggests that they fall into three groups, based on the degree of their genetic relatedness. Autism occupies a group of early-onset conditions, along with ADHD and Tourette syndrome; depression occupies a second group of mood and psychotic conditions; and a third group includes conditions characterized by compulsive behaviors: obsessive-compulsive disorder, anorexia and Tourette syndrome. The findings appeared in December in Cell.

The researchers pinpointed 109 variants that influence at least two conditions; 36 percent have ties to autism.

One variant is linked to all eight conditions. It is located near a gene called DCC, which guides the growth of neuronal projections during fetal development.

Another variant shows links to all of the conditions except anorexia. It appears in RBFOX1, a gene with known ties to autism.

The team spotted 11 other variants that increase the odds of one condition while protecting against another; two of these have disparate influences for autism and schizophrenia. “Even for disorders that are highly genetically correlated, we still saw examples where individual variants had opposite effects,” Smoller says.

Variants with ties to multiple conditions tend to be in or around genes involved in brain and neuronal development. Many of them become active in the second trimester of pregnancy. Another 37 variants that are linked to only one condition — mostly schizophrenia — show peak expression in the first trimester.

Smoller says the consortium is still aggregating data and plans to explore why some genes are linked to multiple conditions whereas others are more specific.