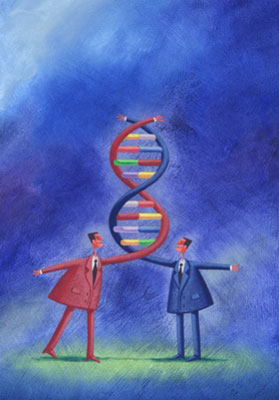 Genetic cause: Common genetic variants contribute to the risk of inheriting schizophrenia, autism and bipolar disorder.

More of the common variants implicated in schizophrenia are also linked to bipolar disorder than to autism. The Psychiatric Genomics Consortium, a large international consortium, reported the results 28 August in Nature Genetics1.

It aims to study the significance of single nucleotide polymorphisms (SNPs), which are common alterations of single DNA nucleotides. Although SNPs are present throughout the population, they may combine to confer risk for certain disorders. Studies need large groups of participants in order to find statistically significant associations between individual SNPs and a disorder.

The new study includes data from more than 32,000 people with one of the five disorders — including 3,303 people with autism and 9,087 people with schizophrenia — and more than 46,000 controls.

To examine heritability, the researchers compared the prevalence of nearly one million SNPs for each of the five disorders in people with disorders and matched controls. SNPs that are shared by the members of a group with a particular disorder — rather than those shared among both the group and controls — are likely to be involved in risk for that disorder.

Based on this analysis, about 20 percent of the risk for developing one of these disorders may be due to SNPs, the study found. The finding suggests that although most datasets are not large enough to find statistically significant associations, the links do exist.

Surprisingly, the researchers did not see a correlation between autism and bipolar disorder or ADHD.

Other factors, such as copy number variants — duplications or deletions of regions of the chromosome — or environmental influences may explain the co-occurrence of these disorders, the researchers say.