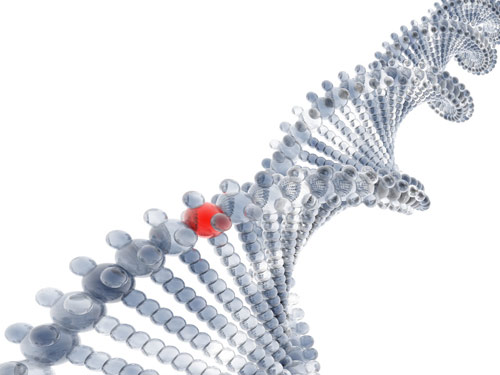 Point breaks: Mutations that disrupt the translation of brain proteins appear more often in children with autism than in their unaffected siblings.

Point breaks: Mutations that disrupt the translation of brain proteins appear more often in children with autism than in their unaffected siblings.

Children with autism carry many more spontaneous point mutations in genes expressed in the brain compared with their unaffected siblings, according to unpublished findings presented on Monday at the World Congress of Psychiatric Genetics in Washington, D.C.

Comparing the exomes, or protein-coding regions, of the genomes of 174 sibling pairs and their parents, the researchers found 105 protein-altering de novo mutations in affected children compared with 55 in their unaffected siblings.

De novo variants arise spontaneously in the sperm, egg or fertilized ovum and are not inherited from either parent. The researchers estimate that at least 45 percent of the mutations expressed in the brains of affected individuals in the study contribute to their autism risk. These variants are non-synonymous, meaning that they alter the protein either by interrupting its translation or by changing its amino acid sequence.

Multiple studies have confirmed the importance of copy number variations (CNVs) — deletions and duplications of chromosomal regions — in autism, but only a few have investigated the importance of point mutations, which alter a single base in the DNA sequence.

The new study, led by Matthew State at Yale University, turned up two different nonsense mutations in the SCN2A gene in two families in the study.

Mutations in SCNA1 and SCNA2, located at chromosome 2q23-24, are known to cause seizure disorders. A 2003 study reported variants in sodium channel proteins, including SCNA2, in six families with a history of autism1.

“Having two de novo mutations in the same gene exclusively in cases is a strong hint that this gene might be important,” says Jonathan Sebat, associate professor and chief of the Beyster Center for Molecular Genomics of Neuropsychiatric Diseases at the University of California, San Diego. Sebat was not involved in the study.

The researchers found little difference in the overall rate of de novo variation in the exomes of affected children compared with those of their unaffected siblings. The two groups appear to share the same rate of so-called ‘silent’ variants, which do not change the amino acid sequence of a protein.

In June, the same group of researchers reported a high rate of de novo CNVs in children with autism compared with their unaffected siblings: 5.8 percent versus 1.7 percent2.

Both studies used samples from the Simons Simplex Collection, a repository of genetic and clinical data from families that have only one child with autism and unaffected parents and siblings. The collection is funded by the Simons Foundation, SFARI.org’s parent organization.

Studies of CNVs, which are much larger than the point mutations identified in the new study, implicate multiple genes. This can make it challenging to pinpoint true autism risk genes.

Exome sequencing offers great potential to identify legitimate candidate genes for autism and other disorders, says Mark Daly, associate professor of medicine at Harvard Medical School, who was not involved in the work.

“Exome sequencing is focused entirely on coding regions that we understand how to interpret,” Daly says. “It makes sense to focus on those, both from the cost perspective and because we understand what those mutations might do and how to study them functionally.”

Before investing large amounts of time and money to carry out functional studies of a candidate gene, researchers must have convincing data implicating it in a particular disorder, Daly points out. “We don’t want to say something is a gene for a disease and start doing functional studies until we’d be certain enough to put a gun to our head and say that this is a gene for autism.”