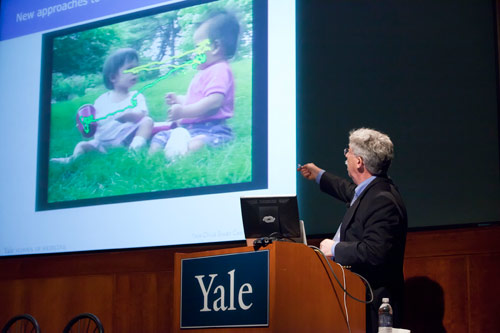 Teacher’s time: As part of an effort to translate the findings of autism research, Fred Volkmar teaches an undergraduate seminar on autism at Yale University.

Teacher’s time: As part of an effort to translate the findings of autism research, Fred Volkmar teaches an undergraduate seminar on autism at Yale University.

I have had a long-standing interest in autism, dating back to my days as an undergraduate in psychology at the University of Illinois at Urbana-Champaign. In the decades since then, I have learned several important lessons related to autism research.

I learned, for example, that autism researchers should be humble when assigning meaning to autism behavior, and seek to translate their findings into useful applications.

I worked as an undergraduate with Joseph McVicker Hunt, who gave me a strong grounding in basic aspects of child development, and with a new faculty member at the time, William T. Greenough, who studied the effects of experience on the brain1.

Later, at medical school at Stanford University in Palo Alto, California, Alberta Siegel, a developmental psychologist, strengthened my interest in child development. After finishing medical school and training in psychiatry, I moved in 1980 from Stanford to Yale University to complete my training, and have been here ever since.

I knew that I wanted to study autism, but at the time of my move there were only a handful of places in the country that had an autism research program — indeed, at that point, most people didn’t even know what the word meant when I mentioned it. The Yale Child Study Center impressed me with its emphasis on combining research with clinical work. There was also a very energetic and active investigator, Donald Cohen, who was interested in the neurobiology of autism.

During my training at Yale, I remained involved in research and also launched what is now the Developmental Disabilities Clinic. This clinic has, over the years, trained many clinician investigators and provided services to many thousands of children. Many teachers have influenced me at Yale, including Albert Solnit, Sally Provence, Ed Zigler, Sam Ritvo and Sara Sparrow.

One continuing theme in my work has been the social basis of autism. Some of the earliest work in this area was highly experimental and rigorous, but also limited in many ways. There was a lack of awareness of ‘ecological validity,’ or trying to understand the child’s behavior in context, and an overemphasis on the negative.

I used to reflect that behavioral studies could be summarized by the phrase “strange adults, looking at strange children, in strange situations with strange tasks only to discover that they behave strangely.”

Increasingly, work from a range of disciplines began to emphasize that children often try to cope as best they can. For example, echolalia — the repeating of words or sounds without necessarily understanding what they mean— could be an attempt on the child’s part to engage in interaction rather than to avoid it. Similarly, unusual behaviors often seem to be the result of complex demands combined with the child’s difficulties in compliance.

Experience with many thousands of children and their parents has underscored for me how humble we should be in attributing overly complex, and often negative, meanings to behavior. Fortunately, over the past decade a growing body of work has helped us move from simple methods of behavioral observations, such as ratings or frequency counts, to more sophisticated methods, such as how children actually perform in social situations, how they look at or listen to social stimuli, and how the brain processes faces.

The diagnosis and classification of autism also became, somewhat unexpectedly, another line of my work. As a disorder, autism had been described by Leo Kanner in 1943, but only officially recognized in the American Psychiatric Association’s Diagnostic and Statistical Manual of Mental Disorders (DSM) in 1980. The work of Michael Rutter2, Israel Kolvin and others had been used to develop the first official DSM definition. This was a major accomplishment, but the DSM-III system was overly concerned with ‘infantile’ autism and didn’t take into account changes based on age or improvements in ability.

As a result of my interest in development, I became involved in work on diagnostic methods and coordinated the DSM-IV field trial for autistic disorder in 19943. The DSM-IV, which for the moment remains the current approach, was done in coordination with Rutter and with the International Classification of Diseases revision 10. It allowed a consensus approach to diagnosing autism that has been useful around the world and in the development of gold standard diagnostic instruments, such as the Autism Diagnostic Observation Schedule and the Autism Diagnostic Interview-Revised.

I have also been privileged to work first as an associate editor and then as editor of the oldest journal in the field, the Journal of Autism. In this position, I have witnessed a dramatic upsurge in both the quantity and quality of autism research over the past decade.

Conveying knowledge about autism has been an important theme of my work and that of the Child Study Center, which has been instrumental in training a generation of leaders in developmental disabilities, including Alice Carter, Elizabeth Dickens, Robert Schultz, Joel Bregman, Robert Hendren, Christopher McDougle and Ami Klin.

I continue to practice the lesson I learned from Donald Cohen on the importance of clinical work for inspiring research and for teaching. At the suggestion of Cohen, more than 25 years ago I began to teach a seminar at Yale on autism. This course, the first of its kind that I know of in the country, has involved about 1,000 Yale undergraduates in a weekly seminar. We also do field placement in schools that work with individuals who have autism and the course is available online at YouTube.

Over the past few years, however, I have become increasingly concerned by the lack of research that seeks to integrate scientific findings into the lives of children, their families and teachers. Although we’ve invested heavily in science, research into interventions has not experienced the same explosive growth that other areas have.

Partly because of our tendency as academics to avoid seeming overly ‘applied’ we have, I think, somewhat missed the boat in translating research findings into approaches that teachers and parents can use. I have made several attempts to address this problem, including A Practical Guide to Autism, a book written to be both affordable and appropriate for teachers and parents4, the series of YouTube lectures, and other, more scholarly books, including the Handbook of Autism5 and a book on evidence-based treatments6, with other books, including one on adolescents and adults with autism, in the works.

It has been a privilege to be involved in autism research for the past three decades. This has been an important, exciting and challenging period of time for the field.

Perhaps the greatest lesson I’ve learned is to respect the clinical phenomenology of autism, and to aspire to combine the wisdom of clinical observation with advances in basic science. For the first time, we are on the verge of relating genetic changes to brain mechanisms and to behavior.

It also has become apparent that, with earlier detection and intervention, outcome is improving dramatically. I now have the happy problem of helping adolescents and their parents plan for college — a major change from just a few decades ago.

Fred Volkmar is Irving B. Harris Professor and director of the Yale Child Study Center.