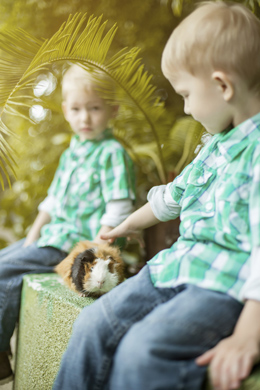 A Swedish twin study plans to search for the shared genetic and environmental origins of autism and attention deficit hyperactivity disorder (ADHD), which are often mistaken for each other. About one-third of children with autism also show features of ADHD, such as inattentiveness, hyperactivity and impulsivity.

Described 15 April in Twin Research in Human Genetics, the Roots of Autism and ADHD Twin Study in Sweden (RATSS), aims to enroll 240 identical twin pairs, including 140 in which only one twin has autism, ADHD or another developmental condition. This will make it the largest study to date of so-called discordant identical twins, meaning only one of the two has a disorder.

Because identical twins share the same genes, the study may be able to home in on possible environmental causes of autism and ADHD.

Other studies have looked at similarities between autism and ADHD, but focus on one aspect of the disorders, such as behavior or genetics. They also tend to compare individuals who have autism or ADHD with unrelated controls. These studies may highlight differences between either disorder and typical development, but rarely point to reasons for those differences.

The new project aims to assess identical twin pairs using a variety of measures, including behavior and brain imaging. The researchers plan to compare the characteristics of the discordant twin pairs with those of typically developing twin pairs.

As of October 2013, they had recruited 109 participants — 72 from the Child and Adolescent Twin Study in Sweden, which includes 80 percent of the country’s twins born between 1993 and 2004, and 37 individuals, aged 8 to 50 years, from advertisements, clinicians’ rolls and the Swedish patient registry. The latter group includes one set of triplets.

Only 40 of these twin pairs have been confirmed as being genetically identical, however. Of the 40 pairs, 10 are discordant for autism, 7 for ADHD and 4 for other neurodevelopmental disorders, such as intellectual disability or tic disorder. Another 5 pairs share a diagnosis of either autism or ADHD, and 14 are typically developing controls.

They also assessed the participants for physical anomalies. To help identify environmental influences, they collected samples of blood, saliva and urine, and checked the cerebrospinal fluid for signs of inflammation.

They also tested baby teeth, when they were available, for exposure to toxins or heavy metals, and stools to assess the populations of gut bacteria. Skin cells from the participants may be used to create induced pluripotent stem cells, which can model the disorders.

The researchers are also administering intelligence tests, analyzing medical histories and collecting structural, functional and molecular brain scans. They plan to track participants for ten years, with the next checkpoint in 2015.