School, healthcare costs add up for children with autism 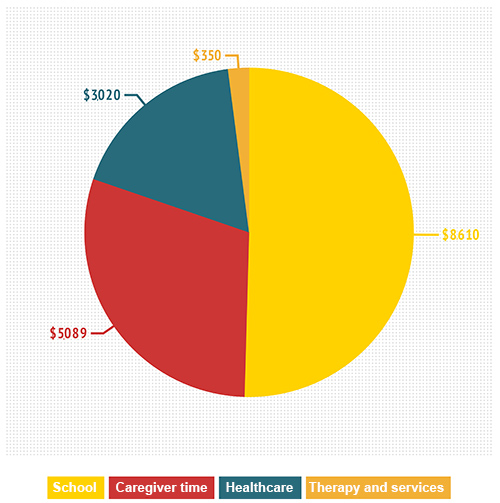 Pretty penny: Schools shoulder about half of the annual costs associated with caring for a child who has autism.

Families and schools spend about $17,000 more per year on a child with autism than they do on a typically developing child, reports a study published in the March issue of Pediatrics.

Researchers arrived at this sum based on results from three national surveys: the National Health Interview Survey, the Medical Expenditure Panel Survey and a survey the researchers organized through GfK Custom Research. Together, the surveys include information from 246 children with autism and about 19,000 controls, ranging in age from 3 to 17 years.

Other studies have mostly focused on healthcare expenses, overlooking the special education fees and the cumulative cost of repeated visits to the doctor.

For example, a review published 28 February in The Journal of Child Psychology and Psychiatry reports that healthcare expenses associated with autism are higher than those for asthma, diabetes or attention deficit hyperactivity disorder.

The Pediatrics study instead takes a close look at other expenses, including education, caregiver costs, legal fees and genetic counseling.

The researchers found that at $3,020 a year, healthcare is not the largest extra expense for children with autism. Costs unrelated to medical care, including summer camp and playtime activities, and money spent by schools on services such as speech and language therapy, make up the bulk of the expenses.

In tallying medical expenses, the researchers first controlled for expenses associated with other conditions such as asthma and diabetes. The majority of the healthcare costs were for prescription medications and doctors’ visits, they found.

About 75 percent of children with autism receive special education services, accounting for the increased schooling costs, compared with 8 percent of controls.

Caregivers in both groups spend about the same amount of time with the children. However, parents of children with autism spend more time coordinating their child’s medical care and providing homework help, and less on general caregiver chores, than do parents of controls.

Surprisingly, the study found that autism families don’t pay more for services such as child care and public transportation than control families do. Also, out-of-pocket costs for all of the categories, such as autism-related therapies, including applied behavior analysis and music therapy, are about the same in both groups.

This may be because many states require insurance companies to cover treatments and other services for autism.