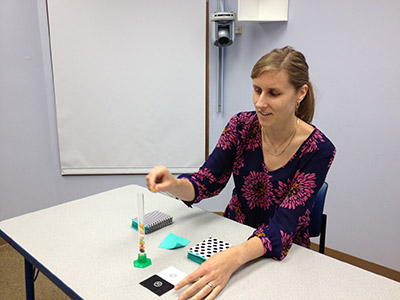 During a high-stakes game of cards, players learn from their bad bets and adjust their strategies. In that way, card games are like life and can help researchers understand how people make decisions.

A new study published 24 July in Autism Research shows that although children with autism can learn to play a card game as well as controls can, they have trouble understanding why they make the decisions that help them win. They are also much more anxious than controls are when they win.

Only 5 of 18 children with autism in the study could explain the strategies they had used in the game, compared with 13 of 19 controls.

This suggests that they learn differently than controls do, and that teachers should check that they fully understand a lesson even when they appear to be doing well.

In the study, boys and girls with high-functioning autism, and controls, all aged 6 or 7 years, played a one-on-one card game with an examiner. The researchers verified autism diagnoses with two reliable tests, the Autism Diagnostic Observation Schedule and the Autism Diagnostic Interview-Revised.

For 40 rounds, the children chose from two decks of cards for the chance to win a favorite snack, such as jellybeans. They had an equal number of chances to win or lose with either deck, but one deck had bigger payoffs and penalties than the other, making it riskier to choose.

To gauge a child’s level of attention and emotional responses, the researchers measured his or her perspiration during the game, using a glove fitted with electrodes. The glove measures skin conductance, a proxy for anxiety.

Overall, both groups performed well and chose increasingly from the safe deck, showing that the children with autism can change their strategies. This is in line with other studies that have found people with high-functioning autism to be flexible in their decision-making.

However, some children with autism perspired more than the other participants, especially when they won. The researchers say these children also score more poorly on tests of executive function — the ability to plan and carry out new tasks. And they have more severe autism symptoms, including problems adjusting to new situations, repetitive behaviors and a proclivity to perform rituals.

Interestingly, children with autism who sweated at appropriate times — for example, when they were waiting to learn whether they had won or lost the game — actually have better social skills than their peers. The controls also sweated more when the examiner chose a card from the risky deck, suggesting that they had figured out the how the game works.

Understanding how different children with autism act can help clinicians create interventions to help them learn and manage their anxiety, the researchers say.