Language grows in diverse ways in children with autism 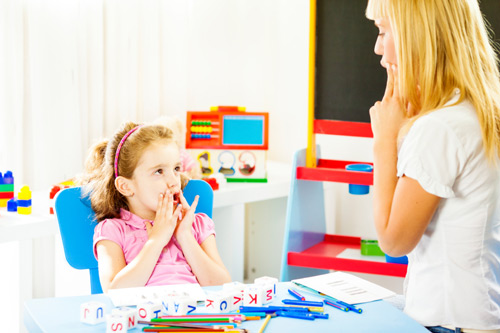 The language abilities of children with autism vary widely in early childhood, but become more predictable after age 6. The results were published 30 May in the Journal of Child Psychology and Psychiatry.

It’s unclear whether the differences in the children’s trajectories is the consequence of biology, early environmental influences such as speech therapy, or both. Either way, the results suggest that the years before age 6 offer a prime window for intervention, the researchers say.

Many children with autism have difficulty understanding language or talking with other people, and about 25 percent are nonverbal. But few studies have measured language development in autism over time, so researchers are unsure of the best age at which to intervene or the methods to use.

The new study charted language development in 106 children with autism referred to autism clinics for evaluation in the late 1980s and early 1990s. Researchers and parents completed surveys and tests on the children’s language skills six times from age 2 to 19.

The researchers divided the children into seven groups based on the children’s language skills at the initial assessment. The two groups with the lowest language abilities included 55 percent of the children, or 58 individuals, and improved over time, but slowly.

The five children in the next group, called ‘late delay,’ started out with close to typical language abilities, but fell behind with age. These children did not lose skills, but learned more slowly than their typically developing peers did. By age 19, they had the language skills of a typical 8-year-old child.

By contrast, the 24 children in the ‘catch-up’ and ‘partial catch-up’ categories started with poor language skills on par with the two lowest groups, and moderate autism symptoms. But by age 6, these children made rapid gains. The children’s language abilities developed uniformly after that and reached the age equivalents of 19 and 11 years old, respectively, by the end of the study.

The 19 children in the ‘near typical’ and ‘mild delay’ groups fared the best. As toddlers, they scored similarly to the typically developing children and largely caught up by age 3. Unsurprisingly, they had mild autism symptoms that lessened with time.

Just 8 percent of the children in the study achieved typical language levels. Other studies have reported that about 10 percent of children with autism lose their diagnosis with age.

Doctors are diagnosing more people at the higher-functioning end of the autism spectrum than they did in the 1980s and ‘90s, the researchers note, so the percentages in this study may not align with a present-day snapshot.