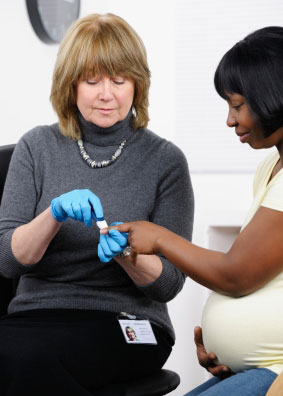 Babies born to women with gestational diabetes tend to be large and go through spells of low blood sugar within their first few days of life. They may also be at an increased risk for autism, reports a new study published 22 September in the Journal of Autism and Developmental Disorders.

The study found that the risk extends to children born to women who had diabetes prior to pregnancy.

As pregnancy progresses, symptoms such as blurry vision, high blood pressure and weight loss along with an increased appetite sound an alarm that the woman may have gestational diabetes.

The link between this condition and autism supports the notion that the period before and shortly after birth is a critical time for brain development. Harmful environmental influences, such as high levels of blood sugar in pregnant women or low blood sugar in children after birth, may disrupt it.

Pregnant women with diabetes are known to have an increased risk of miscarriage, but until now researchers did not have comprehensive evidence that the condition ups the risk for autism.

The new study reviewed 12 reports examining the link between diabetes during pregnancy and autism in the child.

In nine of the studies, the researchers compared the birth histories of a group of children diagnosed with autism with those of controls matched for age and gender. The other three studies followed a group of children over time, identified those with autism and compared their birth histories with those of the others in the group.

All of the studies indicated that children are more likely to have autism if their mothers had diabetes during pregnancy.

The three longitudinal studies had slightly more modest findings. They showed that pregnant women who develop gestational diabetes increase their risk of having a child with autism nearly 45 percent and those who have diabetes before they get pregnant have a 75 percent higher risk, compared with controls.

It is unclear whether either preexisting or gestational diabetes carries a greater risk of autism. Larger studies are needed to clarify the risk from each, the researchers say.

There are several potential explanations for the link between diabetes and autism. High blood sugar might decrease oxygen supply to the fetal brain, for example, and interfere with brain development. Pregnant women with diabetes are also more likely to have inflammatory molecules in their circulation, which may affect fetal brain development.