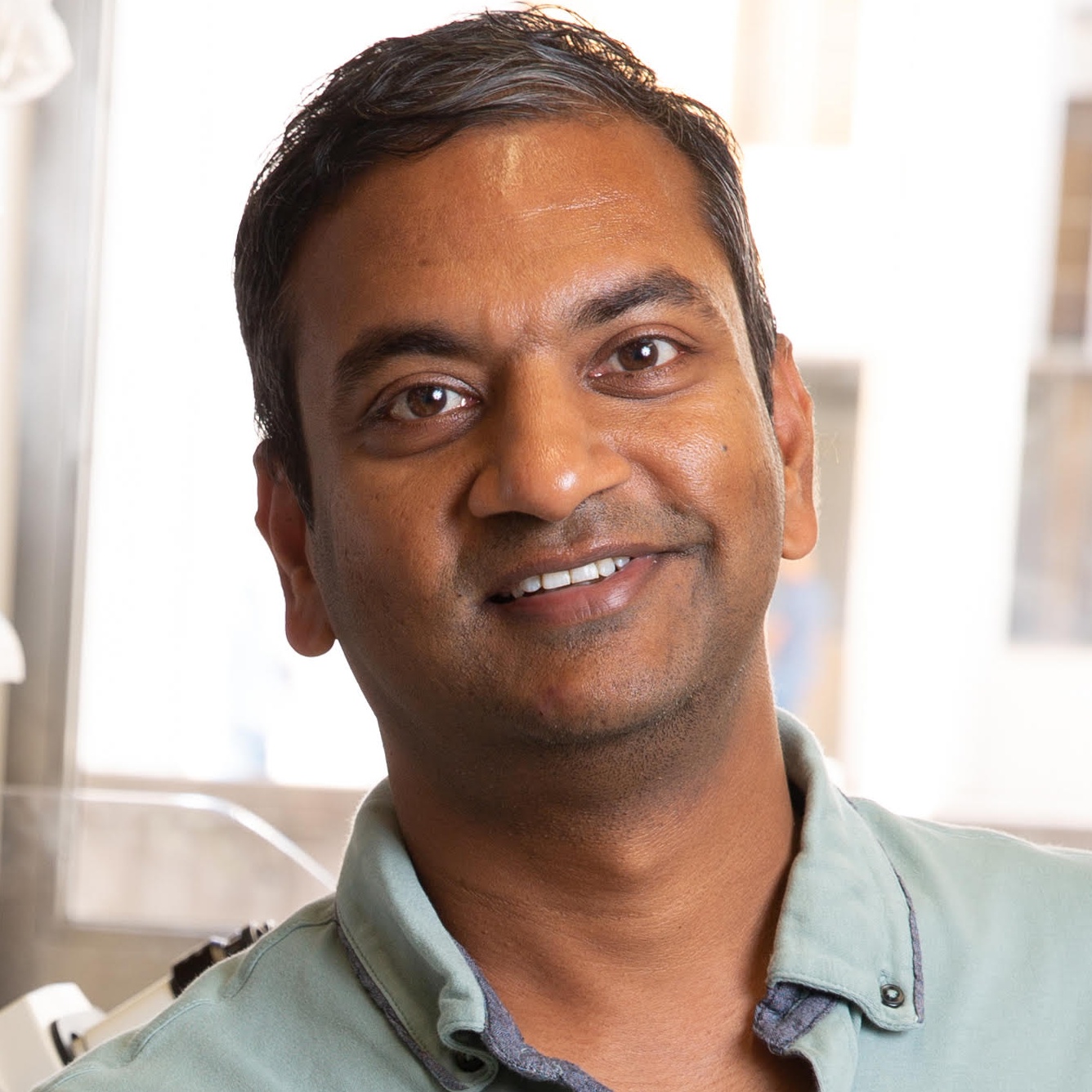 Sreekanth Chalasani
Associate professor, Salk Institute for Biological Studies
Sign up for Spectrum’s newsletters
Thanks for subscribing!
The Expert:

The ‘opto’ in optogenetics — the powerful method some autism researchers use to control neurons in mice and other animals — comes from the Greek optós, meaning visible. It’s a nod to the blue light used to switch on select neurons.

A new technique can do the same, albeit with something invisible: sound.

In a study published in Nature Communications this month, researchers engineered neurons in the motor cortex of mice to express an ultrasound-sensitive ion channel protein called hsTRPA1. They placed an ultrasound transducer near the animal’s skull and switched it on. The response? A flex of a muscle, a perceptible twitch.

The approach, called sonogenetics, enables noninvasive control over any neural circuit that can be manipulated with optogenetics, an invasive method, says lead investigator Sreekanth Chalasani, associate professor in the Molecular Neurobiology Laboratory at the Salk Institute for Biological Studies in La Jolla, California. Spectrum spoke to Chalasani about his early experiments in Caenorhabditis elegans, lucky number 63 and how sonogenetics could one day have clinical applications.

This interview has been lightly edited for length and clarity.

Spectrum: Our readers might be familiar with optogenetics, but I’m assuming sonogenetics is new for most people.

Sreekanth Chalasani: Yeah. Well, the idea in sonogenetics is that we want to manipulate things noninvasively. Ultrasound can travel through bone and skin, into the body. We’ve been using it for decades. It’s safe. The question is: Can we leverage it to get in the body and control cells, like with optogenetics?

SC: Right. In optogenetics, light triggers action potentials in cells that have a channelrhodopsin, or opsin, protein. In sonogenetics, we wanted a protein that would let us have that same level of cellular control.

But finding that protein has been difficult. Lots of groups have been looking for these proteins, and we were fortunate to find one.

S: And the protein is called hsTRPA1.

SC: Yes. This protein has previously been studied, but it wasn’t thought to be sensitive to mechanical deformations or ultrasound. That was our big finding. We can stick this protein into the brain of a mouse and use ultrasound to control movement and physiology.

S: How does this work at a cellular level? Does ultrasound slightly reshape a cell’s membrane, and that triggers this mechanosensitive channel to open and let in calcium?

SC: It’s a little bit more complex than that. We have another paper, in Advanced Science, showing that ultrasound causes cell membranes to shift by about 80 nanometers. What we think happens is that ultrasound causes a change in the distance between the two lipid bilayers. And proteins that can sense that change are sonogenetic candidates. hsTRPA1 is one of these proteins.

S: Is this the first sonogenetic protein that has been found?

SC: No, but our group also published the first protein. It is called TRP4, and we used it to control neurons in C. elegans a few years ago, in 2015. Since then, other labs have also found proteins that might work for sonogenetics.

S: So what’s new in this paper?

SC: We were the first to demonstrate that if you stick our channel into a neuron and you patch clamp that neuron [measure its electrical current], and then you deliver ultrasound, you get an action potential within a few milliseconds. We showed that you can directly control a cell using ultrasound.

S: Ah, OK. But it wasn’t easy to find this protein, right? You screened 191 candidates before finding hsTRPA1.

SC: That’s right. Around the same time that we showed TRP4 could be used to control C. elegans neurons, President Obama announced the BRAIN Initiative, a large effort by the National Institutes of Health (NIH), asking for new technology that could be used in people someday.

They want technology that is noninvasive, safe and that can control different cell circuits. Normally, the NIH would have said, “Shrek, you have no experience with mice. The last time you worked with mice was during your Ph.D., and you just published a paper on C. elegans. We’re not going to give you money to test it in a mouse.” 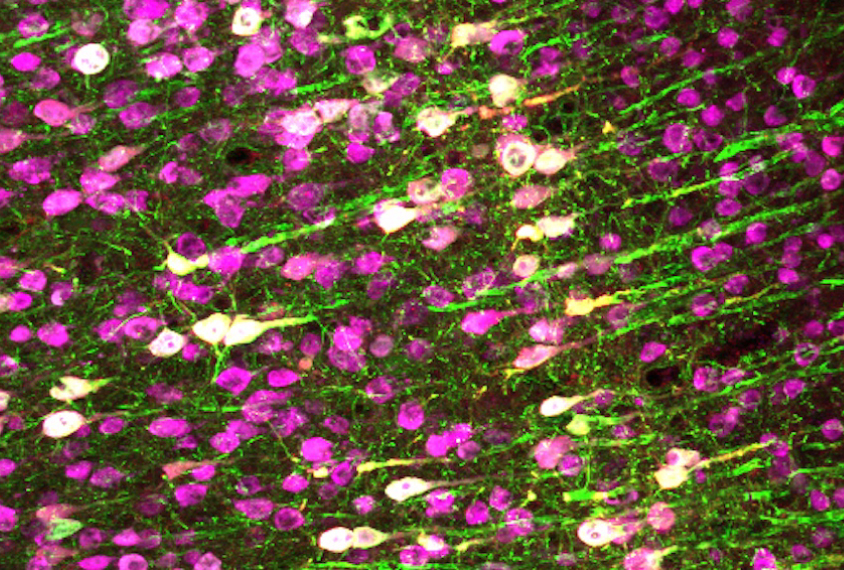 S: I’m assuming they gave you the money anyway.

SC: Yeah, they gave us roughly $2 million. We took that money and tested whether TRP4 would work in mouse neurons. And that experiment did not work. After three months of trying, we found that the C. elegans protein just doesn’t express in mammalian cells. It gets stuck in the endoplasmic reticulum. We had this money, but the path we had proposed to the NIH was gone.

That’s when we decided to create a library of proteins, based on a bioinformatics survey. We synthesized the DNA for each protein and individually expressed them in kidney cells, in fibroblasts. Then we stuck calcium indicators in those fibroblasts and watched to see which proteins had a calcium spike when we delivered ultrasound.

The 63rd protein that we tested worked.

S: You remember the exact number.

SC: Yeah, it was clone 63. I remember because this was a pretty painful process. We were testing one protein at a time. But even after we found hsTRPA1, we then had to test whether it worked in neurons — it did — and then we went into living mice.

This paper is the first time that somebody has shown that you can take this channel, stick it in a mouse brain and control a mouse to move its limbs. We can move their muscles with ultrasound.

S: Walk me through that experiment.

SC: The gold standard, in mice, is to control action potentials and see a behavior. We chose to put hsTRPA1 into motor cortex neurons, a part of the brain that controls limb movements. It’s easy to deliver proteins to the motor cortex; there are good viruses for that. And when you stimulate neurons in this brain region, the limbs move.

S: How precisely can you target neurons in the brain?

SC: Low frequencies can penetrate the skull more deeply, because they deliver more energy, but they hit a larger brain volume. Higher frequencies are the opposite.

With 7 megahertz of ultrasound, we can hit a 100-micron cube in the brain. That’s a reasonably small region. But I think the prize for sonogenetics lies in its noninvasive nature.

SC: Well, look at Medtronic. They have a clinical trial underway, where they’re trying to use optogenetics to treat Parkinson’s disease.

So they take a monkey and engineer its subthalamic neurons to express an opsin protein. And then they stick an LED in the brain, and they can control neurons from outside the body. The problem is that you scar the brain tissue. You can cause blood clots and can kill the tissue whenever you stick a fiber optic into the brain.

Just shining blue light on the brain changes cells’ gene expression, which means optogenetics is changing the brain in ways that we don’t fully understand.

Ultrasound, at low pressures, is totally safe. We don’t see gene expression changes in the brain regions we’ve looked at. The U.S. Food and Drug Administration says that ultrasound is safe for people; they haven’t said that it’s safe to stick a fiber optic into the brain.

S: Do you think that safety will speed up this technology’s adoption in a clinical sense?

SC: That’s the question. So far, we have only found channels that can turn neurons on. But we do have a candidate channel, which we’re hoping to test in animals soon, that can turn a neuron off. It’s a protein that we found from a plant cell.

The real challenge, I think, for both sonogenetics and optogenetics, is how do you deliver these proteins to the part of the brain that you care about? And how would you do it in a child or in a human? We don’t have an answer for that.