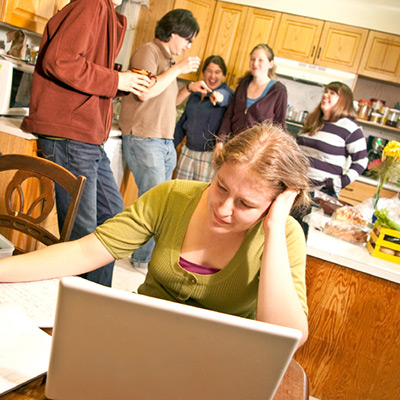 The more traits of autism an individual has, the more sensory problems he or she reports, according to a study in the general population published 5 December in the Journal of Autism and Developmental Disorders.

This relationship holds up even when researchers account for the extreme sensory sensitivities of people with anxiety, mental disorders or migraine, which can be set off by stimuli such as loud sounds or flickering lights.

Up to 90 percent of children with autism react in unusual ways to sights, sounds or touch. A child might shy away from bright lights, appear indifferent to pain or repeatedly seek out certain textures, for example.

These unusual sensory responses make up a class of symptoms included in the Diagnostic and Statistical Manual of Mental Disorders, 5th Edition, and the International Classification of Diseases, 11th Revision, due out in 2015.

In the new study, students and staff members at King’s College London in the U.K. answered questions about their autism traits and anxiety. They completed two surveys on uncommon sensory behavior, such as being unable to tolerate the hubbub of a party, or spinning in circles for fun. A third survey assessed psychotic symptoms, such as hearing an echo of one’s own thoughts.

Of the 772 participants, 23 reported having autism and 55 reported a first-degree relative with the disorder. Another 147 participants indicated having another psychiatric disorder, such as depression, and 85 have migraines regularly.

Individuals who have the most autism traits, such as narrow interests or social difficulties, also show high levels of atypical sensory behavior on all three questionnaires. Results from the Glasgow Sensory Questionnaire showed the strongest association with autism traits, suggesting its usefulness for assessing sensory behavior in adults with autism.

Interestingly, anxiety appears to play a role: Participants who have reported being anxious have both more autism traits and more unusual sensory responses than those who are not anxious. When researchers took anxiety out of the equation, autism traits and atypical sensory behavior remained significantly linked, but the connection is weaker.

However, anxiety appears to occur independently of sensory problems in the autism subgroup, suggesting that the two are interconnected but distinct, the researchers say.

Although people with a history of mental illness or migraine report more atypical sensory responses than others do, the connection between autism traits and sensory scores remains significant in this group.

The researchers note that the close connection between autism traits and sensory sensitivities suggests that treatments for sensory responses may improve some autism symptoms, such as repetitive movements.