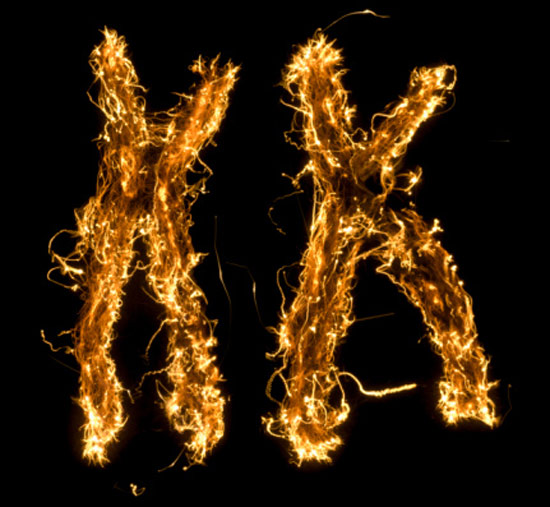 The X files: Sequencing genes on the X chromosome may help researchers understand why autism is more common in males than in females.

The first large-scale study to sequence more than 100 genes on the X chromosome in people with autism or schizophrenia has turned up some promising leads, but no definitive results1.

The study, published this month in Molecular Psychiatry, identifies 30 promising rare variants that may be associated with either disorder. Rare variants appear in less than one percent of the population. The list includes six variants likely to interfere with the translation of messenger RNA into protein. This type of variant, which results in truncated proteins, has potentially severe effects.

Given that autism is at least four times more common in males than females, many researchers suspect that genes in the X and Y chromosomes may be involved in the disorder. Because males carry one X and one Y chromosome, a damaging variant of a gene on either chromosome is likely to have a severe effect.

In the new study, the researchers focused on the X chromosome, which is rich in genes involved in brain development. Specifically, they sequenced genes needed at the synapse, the junction between neurons. Defects in synaptic structure and functioning are believed to underlie both autism and schizophrenia, and variants in synaptic genes such as neurexin 1 have been linked to both disorders2.

However, though the study identified interesting candidate genes for each disorder, it did not identify any variants common to the two disorders.

A 2010 sequencing study of the X chromosome identified nine genes linked to learning disabilities, which are also more prevalent in males than in females3.

“There are many potential mechanisms by which the sex chromosomes could influence autism in a sexually dimorphic way,” says David Skuse, professor in the behavioral sciences unit at the University College London’s Institute of Cognitive Neuroscience. “Sex differences due directly to the actions of X- and Y-linked genes are a continuing subject of interest to many scientists.”

In the new study, the researchers sequenced their 113 candidate genes in 122 males and 20 females with autism spectrum disorders, and 95 males and 48 females with adult onset schizophrenia or schizoaffective disorder. They also sequenced the genes in a control group of 277 samples collected as part of the Quebec Newborn Twin Study.

The researchers used a simple strategy: They winnowed down the genes on the X chromosome that are expressed in the brain to 113 involved in synaptic function.

The study turned up numerous missense mutations — a change in a single base pair that can disrupt protein function — among individuals with autism, as well as silent mutations that affect non-coding DNA.

The autism variants include a de novo mutation — meaning it arises spontaneously rather than being inherited — in IL1RAPL1, a gene involved in the outgrowth of neurons. This step is needed to form connections at the synapse.

Mutations in the IL1RAPL1 gene can cause severe mental retardation in males, with milder effects in females. A 2008 study linked IL1RAPL1 to autism4, but another group reported in April that it did not find any association between the gene and autism5.

In the new study, researchers found two strong mutations in IL1RAPL1, says Rouleau. One of these, a de novo mutation in an affected girl, produces a truncated protein that is not functional.

The second is a deletion of a chromosomal region that includes the gene, transmitted from a mother to three affected boys. That results in a loss of more than 90 percent of the protein, Rouleau says.

The researchers identified several other potentially damaging variants among the autism group in genes that play a role in synapse formation, including OPHN1, a gene involved in cell migration and the growth of axons and dendrites, and MCF2, also believed to be necessary for neuron outgrowth. They also turned up variants in two genes that help regulate levels of serotonin in 2 of the 143 individuals in the schizophrenia group.

However, the functional relevance of most of the variants uncovered by the study is unclear.

Though the study did not result in a grand slam, the approach the researchers used is valid and necessary, say others engaged in similar studies. “I think it is among the first of many studies looking for rare variants of substantial effect size in autism and schizophrenia,” says Stephen Warren, professor of human genetics at Emory University School of Medicine in Atlanta.