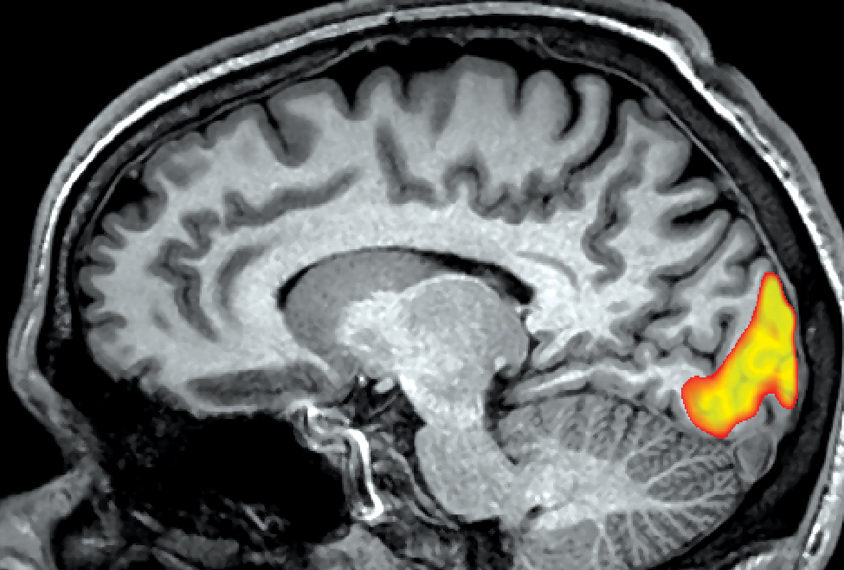 Missed connections: Sensory problems in autistic children may be related to underconnectivity in the visual brain.

Areas of the brain involved in processing vision are more weakly connected to those that process sensory information in autistic children than in controls, according to a new study1.

In some autistic children, this underconnectivity tracks with fewer impairments in social behaviors.

The team focused on connections between the visual cortex and the salience network, which identifies the most important sensory information. The network includes the anterior insula, which plays a role in both sensory perception and processing information that is important for social behaviors.

The team found some differences between autistic children and controls, but they also found variations among the autistic children, indicating that no one connectivity pattern applies across the spectrum.

The study adds to an increasingly complex picture of connectivity in autism. Some research has found that autistic people’s brains are overconnected in neighboring brain regions and underconnected in regions that are farther apart. But the findings have been inconsistent.

“It’s not like earlier theories stating where everything is either underconnected or overconnected,” says lead investigator R. Joanne Jao Keehn, research assistant professor of psychology at San Diego State University in California. “There definitely is a lot more to the story.”

The researchers used functional magnetic resonance imaging to scan the brains of 93 children and adolescents, including 50 with autism, aged 7 to 18. The researchers measured patterns of functional connectivity — the extent to which activity in different brain regions is synchronized — while the children lay still in a scanner. This technique captures the brain in its resting state.

The researchers also used questionnaires to evaluate the children’s sensory-processing patterns, social abilities and executive function — a set of skills that includes planning and organizing.

The team asked the children’s parents how the children respond to visual stimuli — for example, whether they are bothered by bright lights. They grouped the autistic children based on their scores; scores above the median are similar to those of typically developing children.

The overall functional connectivity patterns in autistic children with scores below and above the median are the same, the team found.

In the group with the more typical visual profile, there is no relationship between connectivity and social behaviors. But in the other group, the children with lower connectivity between their visual network and insula have better social abilities, on average.

This finding is surprising, Jao Keehn says, because researchers would expect more atypical connections to lead to more behavioral problems.

The work was published 29 February in the Journal of the American Academy of Child and Adolescent Psychiatry.

The results add interesting new information to the understanding of connectivity in autism, but the field overall is too murky to make any definitive statements, says Jeffrey Anderson, principal investigator for the Utah Functional Neuroimaging Laboratory at the University of Utah in Salt Lake City, who was not involved in the new study.

“There’s such a large literature now, and it’s unfortunately a little confusing, because you see some toward higher connectivity and some toward lower connectivity, and it depends on where you look,” Anderson says.

The findings could also indicate that sensory processing in the brain is somehow involved in the social behaviors observed in autism.

Much autism research has focused on regions of the brain thought to be responsible for social behaviors. But the behaviors may not entirely originate in those regions, says Charles Gilbert, professor of neurobiology at the Rockefeller University in New York City, who was not involved in the new study.

“It’s interesting to think that the sensory processing may be as much involved in autism as anything that is specific to social interaction,” Gilbert says.

Jao Keehn says she next plans to study functional connectivity between the salience and visual networks and other networks involved in sensory processing and social behaviors.