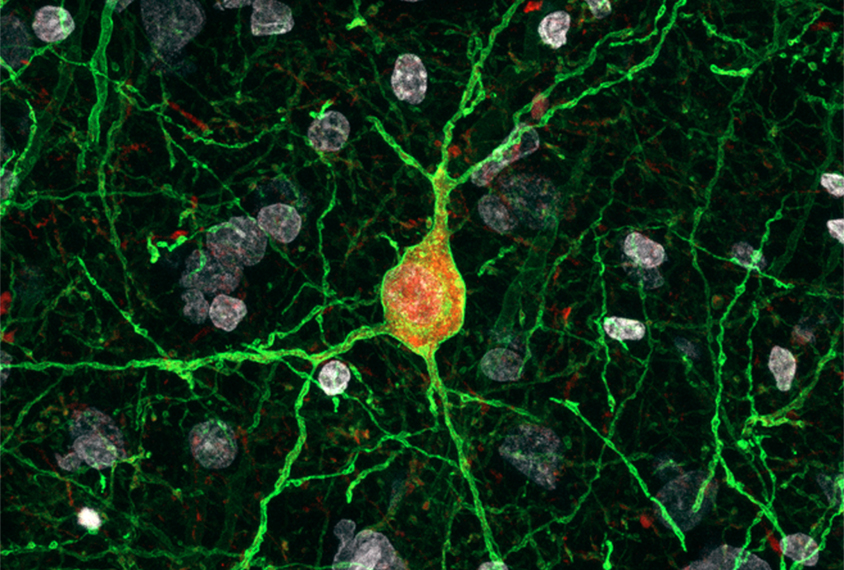 A new viral tool can selectively control different types of neurons that dampen brain activity in rodents, monkeys and people1.

The ability to manipulate inhibitory cells in such a targeted way may help scientists test these cells’ contributions to conditions such as epilepsy and autism.

The technique could even lead to new therapies for autism, researchers say.

“It’s going to allow you to have extremely precise effects on the patients,” says study investigator Jordane Dimidschstein, research scientist at the Stanley Center for Psychiatric Research in Cambridge, Massachusetts.

Inhibitory neurons constitute about 20 percent of brain cells and can be divided into up to 61 functionally different subtypes2,3. Researchers can already manipulate inhibitory neurons using viruses engineered to carry certain genes of interest. But this strategy tends to affect all subtypes simultaneously, making it a blunt instrument, Dimidschstein says.

In the new work, Dimidschstein and his colleagues engineered viruses to carry enhancers, or short strips of DNA that activate genes — but these enhancers work only when bound by particular proteins found in select cell types. Once the viruses are introduced into the brain, only a certain set of cells can express the viral gene. Using this method, researchers can home in on specific neuronal subtypes of interest and tweak their activity with precision.

The new study also provides a framework for mining vast quantities of DNA across different animal genomes to identify additional cell-type-specific enhancers. The study was published in August in Nature Neuroscience.

The team focused on enhancers that can be activated by specific inhibitory cells — those that make a protein called parvalbumin — in the outer layer of the brain, or cortex. These are neurons that fire rapidly and play a dramatic role in shaping the activity of the cortex.

To do this, they looked solely at enhancers that control a gene called SCN1A, which is expressed almost exclusively in cells with parvalbumin. By focusing on this gene, the team sought to find out which enhancers give this gene its cell-type specificity. Mutations in this gene, and a dampening of parvalbumin neurons, can lead to a severe type of epilepsy called Dravet syndrome, which has close ties to autism.

The team narrowed their search to enhancers that met three criteria: They are accessible, meaning they are found in loosely packed regions of the genome; highly conserved across mammalian species; and located near the start of the SCN1A gene.

They identified 10 candidate enhancers and engineered each one separately into a virus carrying the gene for a fluorescent protein. The team injected each virus into the brains of adult mice and found that one virus, carrying an enhancer called E2, had the specificity they were looking for: 90 percent of the fluorescent protein was expressed only in parvalbumin neurons. The virus carrying E2 worked just as selectively in other species, including macaques, rats and marmosets. And the researchers found similar results when they tested it on human brain-tissue samples.

“It’s not like a faraway demonstration of something that might tell you that it might work in humans. It’s been [replicated] in the human brain,” Dimidschstein says.

The researchers also manipulated activity of parvalbumin neurons across species by marrying the enhancer-carrying virus with optogenetic and chemogenetic techniques, which rely on viruses carrying genes that render neurons sensitive to beams of light or to certain chemicals, respectively. In doing so, the researchers could elicit a broad, network-wide inhibition of these cells in the cortex.

Future work will determine whether viruses equipped with enhancers can tweak activity in several other cell types in the brain, Dimidschstein says. The goal is to gain a broad understanding of how researchers can target large categories of brain cells that may be relevant for epilepsy, autism and other neurodevelopmental conditions.