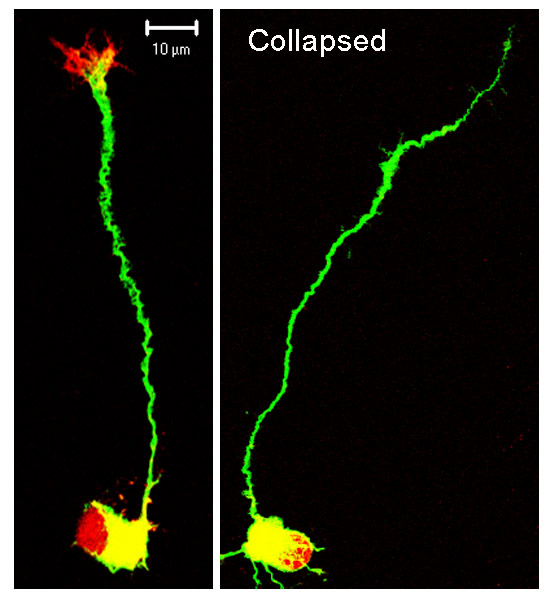 Misguided cells: Neurons in mice that lack TSC2 (left) are less sensitive to ephrinA, which guides the cells to their proper targets, than are those from normal mice (right).

The TSC2 gene, mutations in which cause tuberous sclerosis complex, is needed for budding nerve fibers to find their proper targets in the brain, according to a mouse study published online 10 January in Nature Neuroscience1.

Tuberous sclerosis complex, or TSC, is a rare disorder characterized by the presence of benign tumors throughout the body, including the brain. Roughly half of all people with TSC also have autism; many also have epilepsy or mental retardation.

Researchers have found abnormalities in neuronal connections in other autism spectrum disorders2.The new findings suggest that autism-like behavior in people with TSC may also be caused by abnormal wiring of neurons in early development, researchers say.

“The exciting implication is that if we can figure out a way to correct this abnormal signaling at the right place and at the right time during development, we might be able to prevent autism,” says Mark Bear, professor of neuroscience at Massachusetts Institute of Technology, who was not involved with the new study.

Mutations in the TSC1 or TSC2 genes are known to cause TSC. In 2008, Mustafa Sahin and his colleagues at Children’s Hospital Boston showed that deleting both copies of either gene causes mouse neurons to sprout more than one axon, the slender strands of the cell that conduct electrical signals3. The researchers proposed that this early overgrowth of axons contributes to the neurological symptoms — including autism — that crop up in people with TSC.

Because most people with the disease lack just one copy of either gene, Sahin’s team set out to investigate axon development in mice missing only one copy of TSC2.

In the first few weeks of a mouse’s life, axons from each retina migrate to specific regions of the lateral geniculate nucleus, a part of the brain that processes visual information. When axons find the correct targets, the animal is able to integrate information from the right and left eyes. A similar process occurs during human brain development.

Sahin and his colleagues injected mouse retinas with dyes two weeks after birth and observed the migration of the animals’ nascent neurons. In cells lacking one copy of TSC2, they found, axons grow haphazardly, never reaching their targets.

A group of proteins called ephrins help neurons find their targets by steering axons away from the wrong locations. In cell culture experiments, the researchers found that stimulating one type of ephrin, called ephrinA, effectively guides 70 to 80 percent of normal axons. In contrast, the protein directs only 35 to 40 percent of axons lacking TSC2.

Taken together, these findings suggest that the TSC2 protein interacts with ephrins to control the wiring of axons. Because ephrins are known to be important for forming other connections in the brain, there are likely to be other pathways affected by the loss of TSC2, Sahin says.

“I suspect that many of the senses, not just vision, will be affected similarly,” he adds.

The new study also found that TSC2-deficient neurons have abnormally high levels of mTOR, a protein important for the synthesis of other proteins involved in cell growth and proliferation, and for synaptic plasticity, the ability of neurons to alter the strength of their connections.

Drugs that inhibit mTOR could be used to treat TSC, Sahin says. One such drug, rapamycin, has been approved by the U.S. Food and Drug Administration to prevent the rejection of transplanted kidneys and has shown some promise for treating autism. Sahin and colleagues showed in 2008 that rapamycin prevents multiple axons from forming in mouse neurons that lack both copies of either TSC1 or TSC2.

Several clinical trials are under way to test rapamycin’s effects in people with TSC. In 2008, researchers from Cincinnati Children’s Hospital Medical Center reported that rapamycin shrinks tumors in people with TSC, but that study did not examine the drug’s effect on behavior4.

Sahin’s group is planning a trial to assess whether a rapamycin-like drug, everolimus, alleviates epilepsy and autism-like behaviors in about 50 people with TSC. The team plans to test whether the drug improves intelligence quotient, spatial memory or language development of people with the disease.

Although researchers understand some of the neurological underpinnings of TSC, they don’t know why autism-like features sometimes accompany the disorder.

Brain scans of people with TSC may reveal only two or three lesions, says Peter Crino an associate professor of neurology at University of Pennsylvania. “No one really understands why having two or three lesions gives you this severe neurological phenotype.”

In fact, some evidence suggests that the tumors and neurological symptoms seen in people with TSC occur independently. For example, a 2008 meta-analysis suggests that individuals with TSC can have seizures without harboring any benign tumors5.

These benign tumors are usually identified soon after birth. For example, heart tumors seen on an ultrasound, either in utero or shortly after birth, often prompt researchers to diagnose TSC early6. Early detection could help researchers study how tumors and neurological symptoms are related.

“This gives us two years in which we know these patients are at very high risk of developing autism,” Sahin notes. “Since [TSC is] identified so early, we may be able to interfere with development of autism in these patients.”

Sahin’s team is looking for reliable markers to predict which infants with TSC go on to develop autism. For instance, the researchers have recorded electrical brain wave patterns of 10 babies with TSC while they look at pictures of faces.

The team has also scanned the brains of 10 people with TSC using diffusion tensor imaging, a non-invasive scan that lights up axon tracts. The study participants have a broad spectrum of neurological symptoms, ranging from none to full-blown developmental delays or autism.

More people must be tested before making predictions about the likelihood of autism, Sahin says. He declined to discuss specific results because the imaging studies are unpublished.