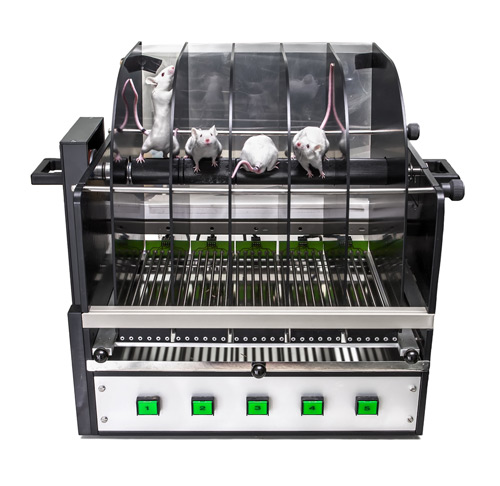 Slip test: Mice born with the Angelman syndrome mutation are clumsy, but their balance improves if they’re treated before adolescence.

Drugs designed to treat Angelman syndrome may alleviate symptoms only if given during a ‘critical period’ early in development. That’s the upshot from unpublished results presented yesterday at a conference in Boston, hosted by the Dup15q Alliance and the Angelman Syndrome Foundation.

Angelman syndrome is an autism-related disorder characterized by developmental delay and seizures. It is caused by deletions or mutations in the UBE3A gene, which regulates the levels of several proteins.

People with the syndrome still have one normal, but silenced, copy of the gene, inherited from the father. This provides an opportunity for drug treatments that can rouse the silenced copy. For example, in 2011, researchers reported that a cancer drug called topotecan activates the silenced copy of UBE3A in mice.

As with all neurodevelopmental disorders, the question for Angelman syndrome is whether treatments can only prevent symptoms before they begin, or reverse the course of the disorder even after it is well underway.

“Of course we have to ask ourselves if there are critical periods,” says Ype Elgersma, professor of neuroscience at Erasmus University in Rotterdam, the Netherlands, who presented the new findings. “If you just turn on the gene, is this magically reversing all symptoms?”

This question is “ridiculously important” because it can help researchers design clinical trials for the people most likely to benefit, notes Benjamin Philpot, professor of cell biology and physiology at the University of North Carolina at Chapel Hill. Philpot led the topotecan work and collaborates with Elgersma, but was not involved in this study.

Mice lacking UBE3A expression have trouble balancing on a rotating rod, obsessively bury marbles and tend not to explore — all reminiscent of the motor problems and repetitive behaviors seen in people with Angelman syndrome.

Elgersma and his team engineered mice in which they could restore UBE3A to 80 percent of normal levels across the brain using a chemical compound. They did this at one of three time points: 3 weeks of age (juveniles), 6 weeks (adolescents) or at least 14 weeks (adults).

Motor skills seem to have a clear critical window: Restoring UBE3A expression at 3 weeks of age normalizes the mice’s performance on the rotarod. Doing so at 6 weeks triggers only a partial improvement and in 14-week-old adult mice has no effect.

None of the other symptoms improve, even when UBE3A expression is turned back on at 3 weeks, even though neurons appear to normalize.

“It could well be that a lot of these things can be rescued, but that 3 weeks is simply too late,” says Elgersma. “Development in the mouse goes really fast.”

The researchers are trying to activate UBE3A in newborn mice, but this is tricky, as the chemical compound they use may be toxic at this stage. They were able to produce up to 40 percent of normal UBE3A levels in the pups by feeding the compound to lactating mothers. This turned out to be enough to increase the pups’ explorations.

In the meantime, there may be other ways to ease symptoms. For example, although activating UBE3A at any age did not alleviate seizures, epilepsy drugs prevent seizures even in adult mice.

“These [new] findings are going to discourage some parents, but I hope they don’t,” says Philpot. “Even if reinstating UBE3A is not possible in adults, there are other treatment opportunities.”