Sponges made from RNA can knock down gene expression 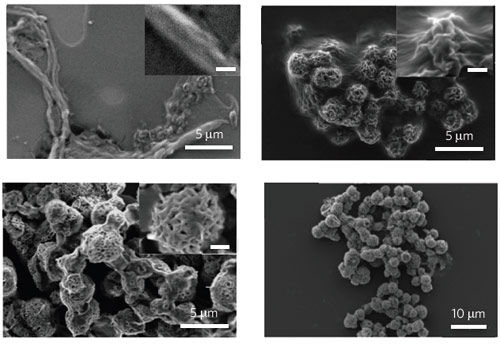 Self assembly: Sponge-like structures of inhibitory RNA start as long strands, then fold into flat streets and finally ball up into individual complexes.

Researchers have created sponge-like assemblies of hundreds of thousands of short fragments of RNA, which can be used to dampen the expression of certain genes, according to a study published 26 February in Nature Materials1.

These complexes, dubbed ‘microsponges,’ merge the delivery system and its contents, potentially allowing the RNAs to better access target tissue and to do so at higher local concentrations.

Short interfering RNAs, or siRNAs, can silence RNA messages that code for protein, and be used to dampen gene expression in cell culture and in living animals. The molecules are also the basis for gene therapy, which might one day be a viable treatment for human disease.

In the new study, researchers created long strands of RNA designed to self-assemble into complex structures. These strands are composed of repeating stretches of RNA that are complementary to the target sequence. They form long thick sheets and then ball up into particles that are two micrometers in size and contain about half a million copies of the RNA sequence. When these particles enter a cell, the cell’s own RNA machinery cleaves them, releasing individual siRNAs, which can then bind to their targets and suppress gene expression.

To test the function of microsponges in live animals, the researchers injected a cancer-causing virus into the haunches of mice. The cancer cells also express a blue protein that helps researchers gauge levels of gene expression. Injecting siRNAs against this blue protein into the tumors lessens the amount of color after four days, the study found.

Similar constructs could be used to dampen the expression of autism-associated genes in mice, or in other models, such as zebrafish.