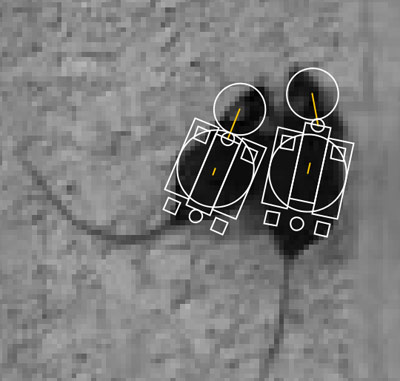 Institut Pasteur, University of Paris-Orsay and CNRS Side step: A new software tool can detect when mice interact, what direction they are facing and which mouse initiated the contact.

Although their social behavior is far different from that of humans, mice remain one of the most widely used models for autism, in part because they are relatively easy to manipulate genetically. A standard assay for monitoring their social behavior is to place a mouse in a three-chamber cage and see whether it prefers to investigate a room that contains another mouse or one with an object.

There are limitations to this assay, however. For one, researchers place the mouse in the cage, introducing confounding behaviors such as anxiety. Also, the mice do not freely interact, so the method only assays whether one mouse approaches the other caged mouse, rather than more complex interactions between the two.

To overcome these limitations, researchers are developing computerized tracking techniques that can automatically detect where a mouse goes in a cage. This method still only follows one mouse, however. Alternatively, a researcher can watch hours of video recordings and manually describe how mice interact in their natural habitat. But this method is labor-intensive, and it can be difficult to monitor the behavior of two different mice at the same time.

In the new study, researchers developed a computer program that can simultaneously follow two mice and track their position, orientation, distance from each other and speed of movement. The researchers then programmed the software to identify a number of behavioral ‘events,’ which are made up of combinations of these measures.

The basic events describe contact between the two animals and the orientation of this contact, such as head-to-head or side-by-side. They also describe the animals’ relative positions when they are near each other (about three centimeters apart).

One of these events, which involves mice sitting close together but looking away from each other, is a newly identified behavior, the researchers say.

The software is also able to identify dynamic events, which the researchers break down into three categories. First-order events describe movement: whether the distance between the two mice decreases or increases and which mouse initiates the change. Second-order events include a first-order movement followed by a description of ensuing contact; and third-order events also include any event that follows contact, such as the mouse that’s being approached fleeing from the interaction.

By identifying these events, the researchers can create complex behavioral sequences that chart each mouse’s choices in response to the other’s behavior.

To test the software, the researchers looked at a mouse from a strain, C57BL/6J, that’s known to be social interacting with a mouse that has a mutation in a nicotinic receptor, which regulates neuronal signals. The technique found several behavioral differences between the two strains.

For example, C57BL/6J mice are more likely than the mutant mice to approach another mouse in their cage after assuming a ‘stopped position,’ in which they are momentarily still. This suggests that this ‘stopped’ position could represent a decision-making moment, during which mice choose what to do next, the researchers say.

The software, called Mice Profiler, is available under a public license.