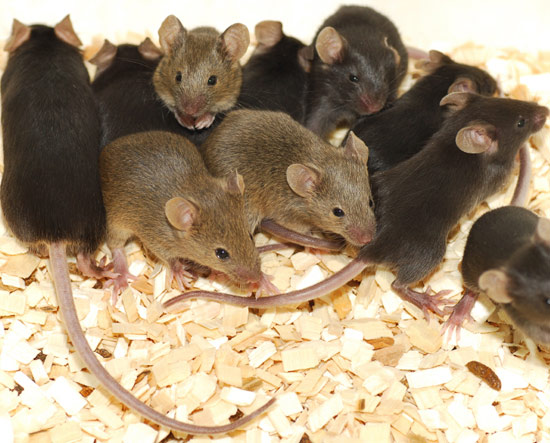 Researchers are creating a population of inbred lab mice, called the Collaborative Cross, with the potential to produce thousands of genetically diverse strains. Experiments using the first of these mice are published in the August issue of Genomic Research1,2,3.

By maximizing the genetic diversity of mouse strains, researchers can identify the gene variants responsible for various phenotypes and behaviors. Studying multiple variants can help researchers understand complex multi-gene disorders such as autism.

Researchers typically use inbred mouse strains, which have identical genes on each chromosome and whose genetics are well established. However, available strains are strikingly genetically identical to one another, greatly limiting the amount of genetic variation that researchers are able to study.

To address this issue, in 2004, researchers launched a project called the Collaborative Cross to create 1,000 inbred mouse strains from 5 lab strains and 3 derived from wild populations4. The project involves interbreeding these strains to maximize their genetic variability. Further breeding among the Collaborative Cross strains has the potential to produce unlimited numbers of genetically diverse mice.

The project has already produced approximately 30 fully inbred strains5, with 40 to 50 projected for the end of the year and 100 by the end of 2012. Researchers are also conducting experiments on many of the existing ‘nearly inbred’ strains of mice.

For example, researchers tested 371 mice from 66 new strains for their susceptibility to the fungus Aspergillus fumigatus, which can also infect humans. Several mice show remarkable resistance to infection, allowing the researchers to hone in on the gene variants responsible for resistance3.

In another study, researchers documented the various phenotypes and behaviors visible in Collaborative Cross strains. These strains show a much wider variety of phenotypes, such as body length or level of anxiety, than those documented for BXD mice, an existing inbred lab strain2.

The researchers also show that classic lab mouse strains have been selected for domesticity, by documenting wild-like behaviors in those bred from the wild-derived strains.