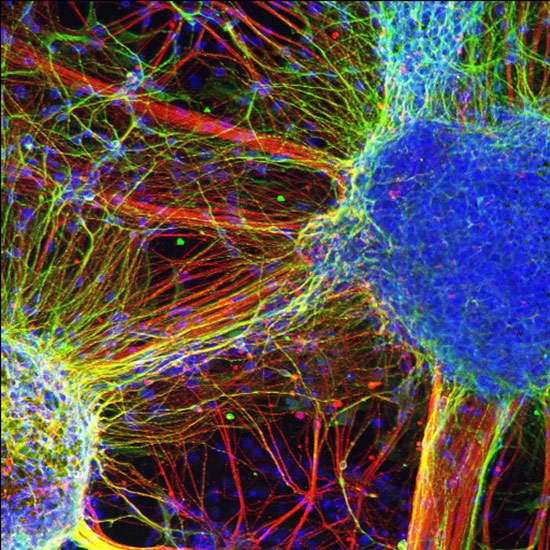 Researchers have taken skin cells from individuals with schizophrenia, bathed them in chemical cocktails and coaxed them to develop into neurons, according to a paper published 13 April in Nature.

The cultured neurons, called induced pluripotent stem (iPS) cells, show dampened signaling and altered gene expression similar to those seen in postmortem brains of people with the disease. Exposing the cells to a schizophrenia drug, loxapine, reverses the abnormal connections between the neurons.

The findings suggest that iPS cells can be used to study other complex brain disorders, including autism.

iPS cells offer unprecedented access to a host of human cells — including heart cells, tumors and neurons — without the controversy surrounding the use of embryonic stem cells.

Several teams have derived iPS neurons from individuals with rare, single-gene diseases. In November, for instance, Fred Gage‘s team at the Salk Institute for Biological Studies in La Jolla, California, made neurons from people with Rett syndrome, an autism-related disorder. The new study, also led by Gage, is the first to create iPS cells modeling a complex psychiatric disease.

The researchers used skin samples from four people with schizophrenia who have a family history of the disease to generate iPS cells. When exposed to the right chemical soup, these iPS cells differentiate into neurons.

The researchers measured connectivity between the neurons by inserting and tracking a fluorescently tagged rabies virus, which spreads through neuronal junctions, or synapses. They showed that iPS neurons derived from people with schizophrenia make fewer connections compared with cells from healthy controls.

The schizophrenia neurons also express 596 genes at different levels than in controls, including 96 genes known to be abnormally expressed in postmortem brains of people with schizophrenia.

Other teams are applying this approach to rare forms of autism. For instance, an iPS study in March identified a potential therapy for Timothy syndrome, a single-gene disorder that causes mental retardation, heart arrhythmias and autism.