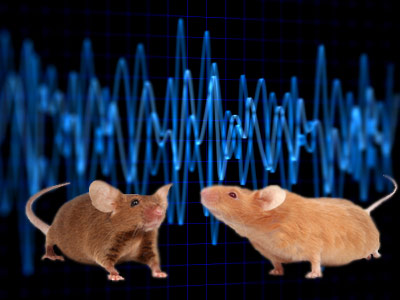 Radio waves: Researchers can use different frequencies of radio waves combined with video footage to track social interactions between mice.

Radio sensors that track multiple frequencies from devices implanted into mice allow researchers to track the animals’ social behavior, according to a report published 12 June in the Journal of Neuroscience Methods1.

Although many groups have developed mouse models for autism, they have found it challenging to assess social deficits, a core symptom of autism. The traditional assay involves placing a mouse in a three-chamber enclosure and comparing its interest in a new object versus another mouse.

However, researchers have to manually place the mice into the cage in this assay, and their handling of the mice can cause the mice to become fearful and anxious, confounding the results. Some groups are trying to develop automated systems that monitor the behavior of a mouse while it roams freely in its home environment, particularly at night, when mice tend to be active.

Researchers can only monitor one mouse at a time using this approach, however. Also, distinguishing marks used for tracking the mice, such as bleach stains on their fur, are less apparent in infrared lighting used at night.

Some studies have used radio frequency identification (RFID) implants, devices that emit a characteristic radio frequency, to track mouse behavior. This technique cannot distinguish between two signals emitted at the same time, however, limiting its use in studying social behavior.

To solve this, the researchers designed a cage with a large central compartment and four satellite cages with RFID sensors at each entrance. They also looked at pairs of mice, each carrying an RFID device emitting a signal of a different frequency. This setup allows them to track where each mouse goes and how long it spends in each cage, which the researchers then match up with video footage of its behavior.

Using this technique would allow researchers to automatically cue up a list of video segments to see whether and how long a given mouse — or two mice of interest — is present in a specific location in the cage. This method makes it much easier to study social behavior, the researchers say.