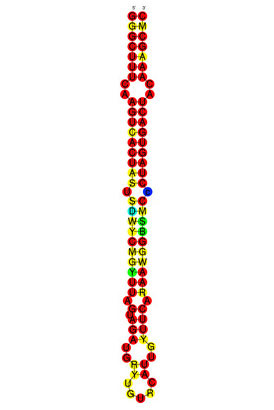 Functional fragments: The levels of microRNAs vary between neurons that activate brain signals and those that inhibit them.

Functional fragments: The levels of microRNAs vary between neurons that activate brain signals and those that inhibit them.

Researchers have mapped the levels of tiny RNA fragments that regulate gene expression in specific brain regions and subtypes of neurons. The results were published 12 January in Neuron1.

MicroRNAs, or miRNAs, turn genes on and off by interfering with the messages that code for proteins. Studies have found abnormal levels of the molecules in postmortem brains from individuals with schizophrenia and those with autism.

The precise role of miRNAs in the brain remains unclear, however. This is partly because traditional methods of detecting and measuring miRNAs require researchers to grind up brain tissue, preventing a fine-tuned analysis of miRNA expression across subtypes of neurons.

Techniques used to separate different kinds of cells — such as sorting them by using fluorescent markers — have been another limitation. They are labor-intensive and can cause cell damage, which may lead to changes in gene expression, the researchers say.

To overcome these limitations, the new study uses a two-step approach to carefully isolate miRNAs from subpopulations of cells, such as certain types of neurons. First, the researchers tag AGO2, a protein that binds to both miRNAs and their targets in intact cells, and then they use antibodies against this tag to extract the miRNAs.

The second step takes advantage of a protein called Cre that can toggle gene expression on and off in specific cells and at specific stages in development. Using Cre, the researchers can restrict the AGO2 tag to specific subsets of neurons or brain regions. For example, they can limit expression to parvalbumin-containing cells, which are a subset of inhibitory neurons.

Using this method to study mouse brains, the researchers found that nearly 500 miRNAs are expressed differently in excitatory neurons and subtypes of inhibitory neurons. The researchers also identified 23 novel miRNAs.

The approach can be used to identify miRNA expression patterns in specific inhibitory or excitatory neuronal circuits, the researchers say. These expression differences could contribute to changes to neuronal circuits that have been described in individuals with autism.