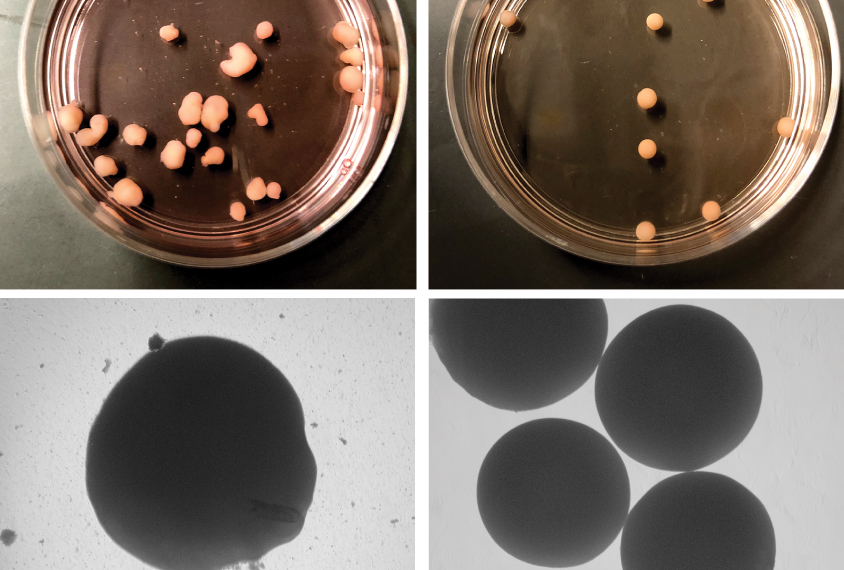 Reliable reproductions: After six months of growth, clusters of cells that mimic the brain’s cerebral cortex (right) have a uniform shape.

A new method enables scientists to grow organoids that reliably reproduce the diversity of cells at the brain’s surface1.

Brain organoids are tiny bundles of neurons and other brain cells grown from stem cells. They mimic elements of the human brain and may help researchers understand how autistic people’s brains develop.

But these mini models tend to grow in unpredictable ways, making it difficult for scientists to compare the results of tests in different batches.

In the new study, the researchers found a more uniform way to grow organoids. They developed a chemical recipe that directs stem cells to form the mix of cells in only the fetal brain region that will become the cerebral cortex.

After six months, organoids grown in this way are slightly smaller than whole-brain organoids, but they have a more consistent overall shape.

The researchers also discovered that the cortical organoids developed in ways that mirror the growing fetal cerebral cortex. For instance, the proportion of astrocytes — star-shaped cells that support neurons — increased between three and six months of growth, as it does during normal development.

The cortical organoids become more complex as they develop: The researchers identified 11 cell types at three months of growth and 13 at six months.

The new protocol could give scientists a reliable set of organoid models for studying brain conditions such as autism and for testing treatments, the researchers say.